At the time of writing (before the Norwich game!), Liverpool had played 22 league games and scored just 25 goals (1.14 goals per game – and yes, this will be a statty piece!). That’s less than struggling Chelsea, boring Man Utd, newly promoted Bournemouth and relegation favourites Sunderland.

Extrapolating our current goal scoring rate, we will end up with a mighty 43 goals. Putting that into perspective, QPR got relegated with 42 goals last season – though they were by far the highest scorers in the bottom five sides in the league during that campaign. 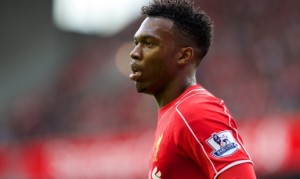 Perennially injured Daniel Sturridge (probably the second best forward in the league after Aguero when fit) is still our joint 4th highest goal scorer in all competitions for us (all stats in this piece after this table are for the league only and accurate as of before the away game at Norwich): 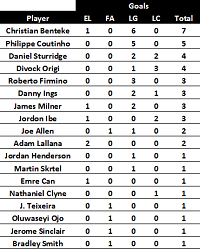 Strangely, we have created the second most amount of chances in the league (290), only 10 behind mega spenders Man City.

However, in terms of Big Chances (Opta definition: A situation where a player should reasonably be expected to score usually in a one-on-one scenario or from very close range) we have only created the 12th most in the league with 29. The same as Watford and Norwich.

So we have a high number of chances created, but a low number of Big Chances, so the ratio between the two will be low. Just how low is quite shocking. 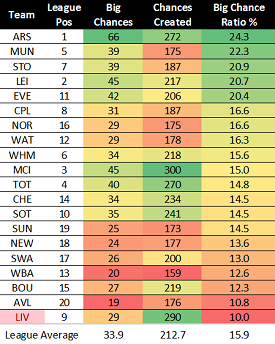 With such a low ratio of Big Chances from Chances Created, it can be reasonably assumed that our overall chance quality isn’t great. A case of quantity, not quality (something Klopp recently alluded to).

If we had the same ratio as the league average, we’d have created 46 big chances compared to our current 29. The current top 6 in the Premier League have a ratio of 18.5%, and if we matched that, we’d have a massive 54 Big Chances, only second to Arsenal’s 66.

When it comes to scoring them, we aren’t much better: 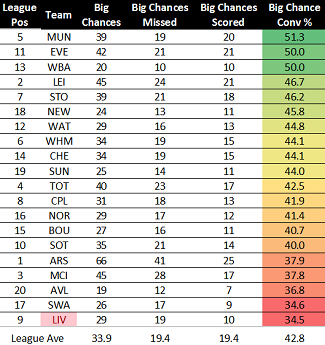 Bottom of the metrics for this one too.

In the league this season, there have been a total of 678 Big Chances. 388 of those have been missed, which I presume means that 290 (just under 43%) have been scored. This shows the importance of the Big Chances created.

What did surprise me somewhat is the fact that league position doesn’t seem to bear any correlation to Big Chance conversion rate, though the number of Big Chances created seems to (obviously!).

So we have created the second most chances this season but have the worst ratio of those chances being Big Chances, and when we do create a Big Chance, we miss two thirds of them.

The numbers don’t look any prettier when we look at general conversion rates either. 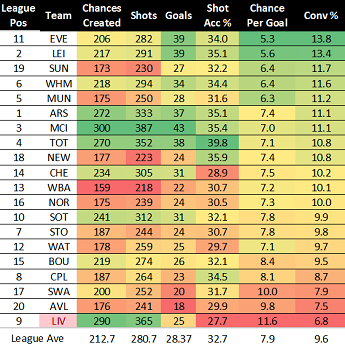 We have the second most shots in the league (only behind City) but the worst conversion rate, shot accuracy and chances per goal. It would seem that it is these three metrics that are killing our league campaign.

And who are our biggest culprits? Not that this is a blame game, just to see where we can improve. 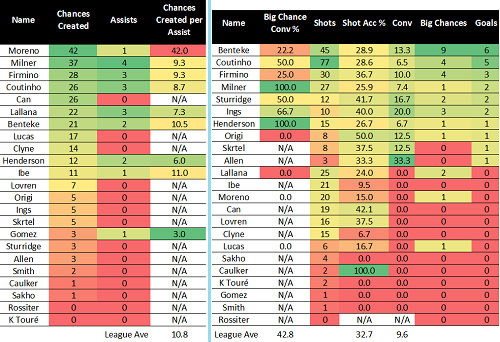 I will admit that comparing assists with chances created isn’t the best way to define whether a chance is good or not, but with the information available from FFS it’s the best we can do (ideas welcome).

Overall we seem pretty decent in this, with most of our players hovering around the league average. Apart from Moreno, at nearly four times more than the average. Some of his crossing has been poor, but at the same time he’s in the position to make the chance. In fact, nearly three times as often as Clyne who has yet to register a league assist.

According to the numbers, all defenders in the league have created 783 chances with 70 assists = 11.2 chances per assist, so Clyne needs is just over the average too.

For midfielders, the average is 10.4 chances per assist. Lucas is below this figure with zero assists, though arguably this isn’t his job considering he rarely gets into the final third, but Emre Can has no assists from 26 chances.

Don’t read too much into this, as assists depend upon the finisher too, not just the quality of the chance, however it’s not nice to see us below average on another metric.

Speaking of finishers, the league average conversion rate for a forward is 14.3%. Only Sturridge and Ings are higher than the average, and Benteke isn’t a million miles away. Firmino and Origi are both below but have mitigating circumstances (to an extent).

Midfielders have a league average conversion rate of 8.2%. None of ours exceed that figure –  apart from Allen with a total of one goal from three shots, so not really a big enough sample size. Coutinho however has a huge sample size of 77 shots but converted just 6.5% of them.

In fact, all of our midfielders have had 193 shots with just nine goals between them. That’s a conversion rate of 4.7%. Pretty dire.

So where does this leave us?

I don’t think we are a million miles away, despite what some of the numbers tell us.

We are creating a plentiful amount of chances, but I feel the quality of those chances aren’t as high as the could/should be. Klopp has mentioned this too.

If we reduce the chances we create, but make sure the quality is higher, we should see a better conversion rate too. I presume this is where Klopp is spending most of his efforts. When he’s got time to train. And when not working on defending set pieces. Easier said than done, but given the way Klopp’s Dortmund team performed, I’m quite confident of seeing an improvement. Time will tell.