As Barcelona’s and Spain’s regal, perfected, pass-and-pass-and-pass-again football were conquering all before them both internationally and in club football, in Germany a frenzied, new, ‘heavy metal’ alternative style of play was about to usher in a new era, one that has permanently altered the landscape of elite European football.

One of its key architects was Jürgen Klopp. 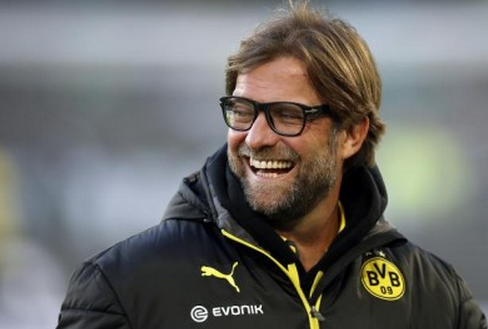 At Dortmund, Klopp was tasked with rebuilding a club that had barely survived financial ruin, and did not have the money or will to compete for players in the transfer market. Thus he was forced to build his side around Dortmund’s youth academy graduates and cheaper experienced players. He succeeded in a remarkable way, rising to become one of the best managers in football in the process by leading an unheralded Dortmund side to the 2010-2011 Bundesliga title, the 2011-2012 German domestic double and the 2012-2013 Champions League final.

Klopp’s path from decent football player to world-renowned manager and his eventual achievements are well known, many stories told and retold about his Dortmund side. What is not explored with the same detail is not what the German achieved but how he did so; and whether recreating all this in his new club Liverpool would be achievable. This article aims to fill those gaps from a point of view that is often either missed, misunderstood or not well enough explained – the angle of continual squad building and its tactical management.

In season 07-08 Dortmund spent the whole season fearing relegation, eventually finishing 13th with 40 points (9 above the bottom three). The manager Thomas Doll is sacked and the promising, then still 40 years old, Jürgen Klopp is appointed.

The new manager purchases Subotic (reportedly the only player bought due to Klopp’s recommendation, having previously managed the Serb at Mainz), Zidan, Owomoyela, Santana and Hajnal – all of whom eventually play an important part in the new season.

Klopp starts his Dortmund career by deciding on a 4-2-2-2 formation and a direct attacking style of play based on quick transitions and heavy pressing. The five games played with that formation are somewhat underwhelming, with the performances uninspiring. The results of the first four games are acceptable, (2 wins and 2 draws) but a heavy 1-4 defeat away at Hoffenheim is the point Klopp decides to change the formation and reformat his side.

In comes the 4-diamond-2 formation that sees Klopp’s side lose only four of the remaining 29 games (all away from home). The team wins 13 and draws 12 matches while scoring 47 and conceding only 24 with 13 clean sheets. What’s more, during the whole season Dortmund remain unbeaten at home. Their home record sees more draws (9) than wins (8) but with a goal-scoring of +23 (34 for, 11 against) and 8 clean sheets.

Another positive record is that in the second part of the season (after the winter break), when Klopp settles on a starting XI, introducing Sahin as chief playmaker and forming a front pair of Valdez and Frei, the team wins 8 of their 10 games (1 draw, 1 defeat).

The first couple of months after the formation switch sees Klopp continually chopping and changing his side, testing out different players in different roles while trying to forge reliable partnerships and find the best possible balance. Gradually, in late autumn, the manager manages to find the right formula and settles on a side that more or less plays until the end of the season.

One of the big blows Klopp has to deal with almost immediately after being appointed is that the then young and still promising ball-playing centre-back Hummels is often missing for a few weeks here and there until a nasty injury takes him out for the remaining of the season around November. This is the period when Sahin starts to see more and more time on the pitch, with the manager trying to compensate for the lack of a ball-playing centre-back with the addition of a proper deep-lying playmaker who can aid the front unit by pulling the strings from just ahead of the defence.

With Hummels mostly injured, the new players Santana and Subotic form a reliable pair at the back, flanked by the experienced Brazilian Dede (at left-back) and another new guy Owomoyela (at right-back). In midfield the ball-playing skills of Sahin (as the left-sided midfielder) are eventually balanced with Kehl’s ball-winning prowess just ahead of the back four with the winger Kuba (the nickname of Blaszczykowski) playing the role of energetic shuttler to the right.

After a series of tries with different players, Klopp also finally settles on the front trio of Hajnal behind the Valdez-Frei pair. The unit is well balanced as Hajnal acts as both de-facto link between the midfield three and front pair and chief creator and creativity provider in the final third. The hard-working Valdez is tasked with the dual role of being the de-facto left-sided shuttler (compensating for Sahin being a playmaker and not a typical box-to-box player) largely doing what Kuba does to the right but from a bit higher up the pitch. The Paraguayan forward’s role includes pressing from ahead, drifting wide to help stretch the play and getting deeper and goalside when the team is out of possession to help create a more compact defensive shape. Meanwhile the Swiss target man Frei acts as the team’s main finisher, who everyone else tries to feed the ball and create for. 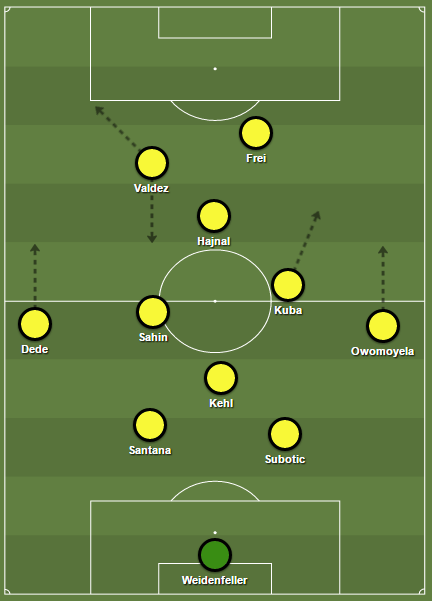 The Week That Was – Friday 16th October