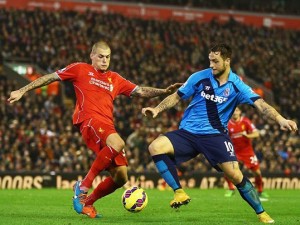 The 2014/15 Premier League season draws to a close on Sunday with Liverpool travelling to the Britannia Stadium to face Stoke – 3pm kick off UK time – where Mark Hughes will be hoping to add to our misery in what has ended up being a disappointing season for the Reds. It will be Steven Gerrard’s final competitive game for Liverpool and he may not be the only player who features for the last time under Brendan Rodgers.

While Liverpool could end the season anywhere between 5th and 7th depending on results, Mark Hughes’ side will finish 9th for the second consecutive season and have recorded wins at Manchester City (1-0) and Tottenham (2-1) as well as beating Arsenal and Spurs at home (3-2 the former, 3-0 the latter this season). Liverpool secured a 1-0 victory at Anfield earlier in the season thanks to Glen Johnson’s late winner, with the corresponding fixture last season an eight goal thriller ending 5-3 in our favour. That was our first win at Stoke in the Premier League from six attempts (three defeats and two draws).

Liverpool’s record against teams managed by Mark Hughes (all competitions):

Can a Manager Combine Coaching with Tactical Analysis?

The Week That Was – Friday 22nd May