Holy Comolli! – Was He Right?

Holy Comolli! – Was He Right?

On 3rd November 2010, Liverpool Football Club announced that Damien Comolli had been appointed as Director of Football Strategy, with part of his remit being to oversee the recruitment of new players to the club. Before his departure on 12th April 2012, he headed the signing of 10 players .

After leaving by ‘mutual consent’, Comolli took LFC to a employment tribunal in November 2012 after rejecting the original offer of compensation – something that doesn’t strike me as being particularly ‘mutual’. Recent comments from Comolli give the impression that he still isn’t completely over the parting from LFC. Just a couple of weeks ago, he stated:

“When I left Liverpool, the owners told me Henderson was a massive mistake.

“Now he’s turned out to be the next Liverpool captain and he’s a regular in every game.

“I don’t think I have to justify whether Carroll was a good decision or a bad decision. Look at it as a whole.

“When people talk to me nowadays about Liverpool, they say what a fantastic job you did in bringing players like Luis Suarez and Jordan Henderson to the club.

“The issue I have got is when a group of owners approach somebody like me and say we want to invest for the long term, we want you to sign young players, we want you to put together a squad which has a future for the next three to five years, we want you to work with the academy and we start to do all this and after a few months or a few years they say: ‘Sorry, it’s not working out’.

“You cannot say you have to focus on the future and at the same time say the young players are not ready to compete at the top level.”

I’ve always had the impression that he was treated a little unfairly, and with these latest comments, it would seem that he does too. So I’ve decided to have a look at his record with us and Tottenham to see if that really is the case. With many thanks to Paul Tomkins for supplying the TPI data, we can see how he has fared in the transfer market. Dan Kennett also laid the foundations of the piece, with his Tomkins Times article on Pay As You Play; Damien Comolli at Spurs: A TPI Case Study.

It’s all well and good how much they cost the clubs, but what is most interesting is the profit and loss made, and comparing this to the average for the Premier League era. Paul kindly included over 700 other transfers with their CTPP fees to give a broad picture of how fees look in general and when we look at the data comparing it to Comolli signings, we get the following: 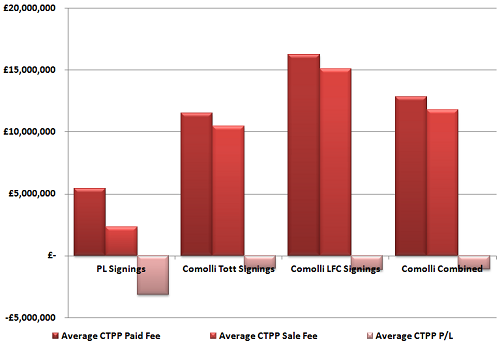 (Some players are still at the clubs they were signed for, so a value has been assigned to them as opposed to a ‘Sale Fee’).

This is something I’ve never considered before when looking at transfers and Comolli comes out fantastically well. In fact, if you appoint the Frenchman, you can reasonably expect to lose almost SEVEN times less on transfers than anyone else in the league.

We have to admit that 36 transfers is a small sample. For example, Jordon Ibe has been ‘valued’ at £5m, but who would sell him at this moment for less than £20m? I wouldn’t. It’s completely plausible he goes on to be a £50m+ player. Put this figure into the numbers and Comolli would make over 20% PROFIT for us and 1.5% overall.

Similarly, if Bale didn’t become Bale and was sold for £5m, Comolli’s average gives an almost 24% loss, but still 2.4 times better than the league average.

Whilst still good, it does illustrate the small samples we are taking into account. However his history gives a good indication of what he is able to provide. And if your losses are seven times less than your rivals, you’re in a superior position to invest rather than having to cover losses.

We know from Paul’s work on the ‘cost’ of winning the title that every penny counts, especially if (like LFC) you are part of the chasing pack. Transfer efficiency increases your chances of more money (via CL and prize money), so you could reasonably expect to improve faster than your rivals too.

The other thing I wanted to look at was how useful the signings were. It’s all well and good signing a player and only making a small loss or even a profit on them, if they don’t contribute to your team (of course there are the caveats of players who are signed as squad players – Doni springs to mind). 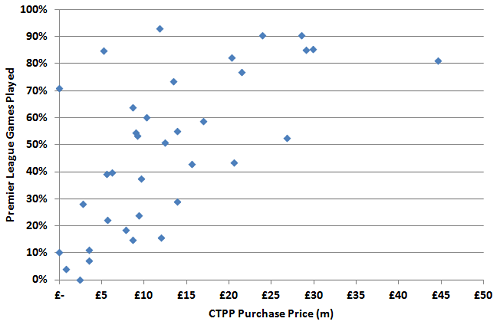 There seems to be a strong correlation between the cost of the player and the amount of games they play, which would suggest (contrary to Tomkins Law) that when Comolli is involved, the more the player cost, the ‘better’ he is (presuming that the player is on the pitch due to their ability as opposed to their price tag).

In fact, Comolli signings have featured in over 48% of available games. If you exclude youngsters (such as Ibe, Alnwick, Coates, Gunter, etc.), you are left with 29 players, who (on average) appeared in over 57% of games, nearly 1800 appearances (and counting), lost ‘only’ CTPP £0.6m each and have an average age of 24.8 when purchased.

That, in my book, is a pretty impressive record. Unfortunately, I don’t have the data to compare that to the other players in the PL, but I would hazard a guess that it is superior in almost every aspect.

As mentioned, this is a small sample size of just 36, but how many managers or DoFs sign 36 players? A handful I would think.

For me, there is certainly some merit behind Comolli’s methods, and whilst huge losses were made on Bentley, Downing and Carroll (almost CTPP £72m), I would look to Kenny to shoulder some of the ‘blame’ of the latter two, given the style of play he was looking to implement and Comolli catering for it. But this isn’t the blame game, it’s a look at how well Comolli has performed, and I have to say that I am impressed.

Perhaps JWH and co were a little too hasty after all?