For this game both managers had some injury worries. But whereas Rodgers had the strength in depth to ensure there was not too great a drop off in quality, Pardew was hit hard by the absence of his two most reliable midfield players, Jedinak and McArthur. Fortunately for Palace though, their most mobile centre-back – Dann – and Ledley – their third most important midfielder – were passed fit to start.

As such Pardew expectedly started with Ward as one of his central midfielders and played a very reactive 4-4-2 formation instead of going for a three-man midfield shape or a more adventurous style of play.

On the other side, Rodgers made only a couple of changes and played with a full-strength team – Allen came in for the injured Gerrard while Markovic started instead of the cup-tied Ibe on the right flank. 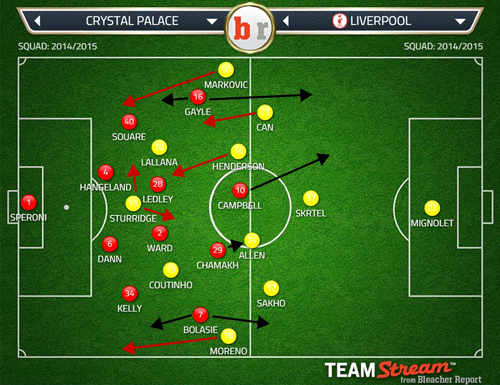 The way Pardew approached this game was identical to the one he used in his last game against Liverpool as Newcastle manager. Interestingly, back then Rodgers for the first time used the current 3-4-2-1 shape, even if the way it was supposed to function and the personnel executing it were completely different to its current incarnation. As such it wasn’t a major surprise that Pardew opted for the same strategy as at the start of November.