Liverpool will be hoping to make it three away wins in a row when they travel to Villa Park on Saturday – 3pm kick off UK time – with Paul Lambert’s Aston Villa side hoping to end a goal drought which was extended to four league games following their 0-1 defeat at Leicester on Saturday. Ten points separate 10th placed Liverpool from Aston Villa in 13th, while our 1-0 victory over Sunderland combined with favourable results elsewhere means we have reduced the gap to 4th placed Manchester Utd to five points. 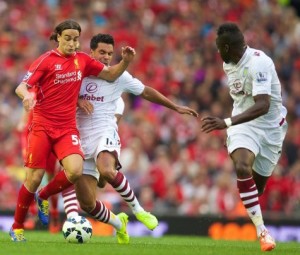 Aston Villa have recorded just five wins from their previous 21 league games, although one of those wins was the 1-0 victory at Anfield back in September, courtesy of Agbonlahor’s 9th minute strike. If Villa manage to claim maximum points on Saturday, it will be their first league double over the Reds since the 1992/93 season. Paul Lambert’s side have the best defensive record outside the top four having conceded 23 goals and have kept seven clean sheets. However it’s their inability to score goals that is the cause of their struggles, with 11 goals scored in 21 matches while they’ve failed to find the back of the next in 11 matches.

Liverpool won the corresponding fixture last season 1-0 thanks to a Daniel Sturridge strike, making it four wins from our last five visits to Villa Park. Paul Lambert has has a mixed record as an opposition manager against Liverpool. He’s lost all three matches against us as home team manager with Norwich City and Aston Villa but has won two and drawn two of his four visits to Anfield.