Given the lack of available centre-backs (Clark suspended, Vlaar and Senderos injured), it was expected Villa would start with a back four formation (although a back three shape may have benefited the clash tactically, making it more fascinating). Lambert’s decision to start with four central midfielders was interesting though and kept his options open in terms of what formation his team would line-up in. At the end it was a kind of lopsided 4-1-4-1 with Cleverley deeper and narrower off the right and Agbonlahor keeping a higher and wider position on the left.

Rodgers’s decisions were more straightforward. With Gerrard not fit enough to be even on the bench, Sterling came into the starting XI after his two week break as the single change from the Sunderland game. 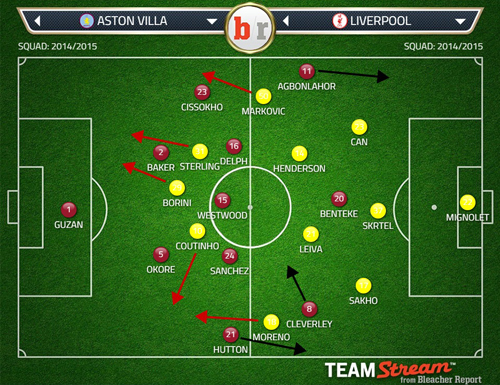 Villa good in the middle but poor at both ends

Lambert’s starting XI meant Villa could line up in two ways. The first option was for the four central midfielders to form a diamond midfield unit with basically any of them able to play at the tip. Depending on what Lambert wanted from his team he may have used Sanchez as a kind of advanced destroyer, Westwood as advanced playmaker or one of Delph or Cleverley as additional runner. Similarly, depending on what Lambert would put emphasis on – additional creativity or extra defensive cover – Westwood or Sanchez, respectively, could have been utilised at its base.

A Celebration, a Blocked Move, a Denied Dream