My hunch is the Robbie Fowler and Michael Owen ruined Liverpool fans when it comes to assessing young goalscorers. (And thinking back, Ian Rush, who couldn’t score for toffee aged 19, became prolific at the age of 20, which is still pretty young.) We almost expect goalscoring to be ‘natural’ from the age of 18 now. And yet Fowler and Owen emerged in the ‘90s, before the Premier League went up a level.

With rumours of ‘low scoring’ Divock Origi arriving early in January (which I believe would be worthwhile, if it does happen, even if it’s just as a sub), it’s worth investigating the potential of young goalscorers. 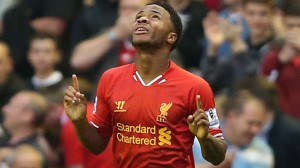 While not every prolific kid in youth team football – the “naturals” – will translate that into senior goals (see Mellor, Neil), it’s worth looking at how long it takes the best strikers to adapt to the top level. Speaking from my own experiences in my teens, and as a spell as a semi-pro, the first thing you notice as a striker when you step up a division or an age group is how much better the keepers are. And in the Premier League youngsters will suddenly face the best in the world, rather than the best under a certain age, many of whom won’t even make a career in the game. You have an idea of what you have to do to score, based on years of playing at one level; but now you need to recalibrate, because unless you place it perfectly you’ll usually find the keeper can deal with it. Unless you can deceive the keeper, you’ll need to start finding the corners.

This is what Sterling and Origi are currently experiencing. For Belgium U19s Origi scored 10 in 19 matches; for the full national team he has a respectable three in 12, yet what is his true level? Sterling could score five in one game from the wing for Liverpool’s U18s, but he had to hoodwink a jobbing youngster, not David de Gea.

If you look at Sterling’s dribbling when he got into the first team it was not yet ‘scaled up’ to the elite level: lots of running into defenders, with the notion that he was going to do enough to beat them. But then, starting from halfway through last season, he really sharpened up, with more decisive movements, swifter body swerves, tighter touch, and so on. He realised he couldn’t just run and hope, which is what he was doing to kids his own age, such was his superiority.

With all this in mind I thought I’d look at the goal returns of Sterling and Origi in comparison with the big, proven goalscorers of the Premier League era, with one or two from overseas thrown in for good measure. It’s worth noting that these are players who featured in different positions at different clubs at different times, and sometimes in different leagues. They may have played for strong teams in weak leagues or weak teams in strong leagues. Some picked up serious injuries along the way, others perhaps played too much football at a young age, while some are still playing, and even still improving. And of course, some are regular penalty takers. So they are not necessarily comparable as ‘like for like’.

Also, for the purposes of this piece I stuck to league games and goals, because cup football is more unpredictable. (As an example, Iago Aspas has two cup hat-tricks this season, and got his only Liverpool goal against Oldham, but hasn’t scored a league goal for 18 months.)

It’s fair to say that this is not a shoddy list I’ve knocked up to suit my argument; these are all elite attacking players, even if some did better abroad than in the Premier League. All of them, bar two*, have scored 20+ league goals in a single season in the Premier League, Serie A or La Liga. (*Sanchez got 19 for Barcelona last season, and Gerrard’s best for Liverpool is 16, although he has surpassed 20 goals in all competitions on three separate seasons. I think both are justifiably included.)

Before going any further I have to admit that there is also the Francis Jeffers Principle, in which a player can score almost 20 Premier League goals in his teens, and finish his career with 40 league goals in total, despite dropping down the divisions to play against inferior defences. Good teens can turn bad. So nothing I say about Sterling and Origi is supplied as proof that they will definitely become prolific finishers. However, they fare pretty well against those who set the gold standards of goals in their 20s.

First of all, look at the combined average graph for all of the players, which gives a great idea of how it takes time to peak, and that 25 is the ideal age for a striker. While individuals can still be prolific after 25, it’s probably worth being wary of signing anyone over that age, not least because the fees are usually higher (you’re paying for what they’ve done, rather than what they will definitely do). And, of course, it’s still a gamble; both Torres and Shevchenko were ‘perfect’ strikers who bombed for Chelsea. 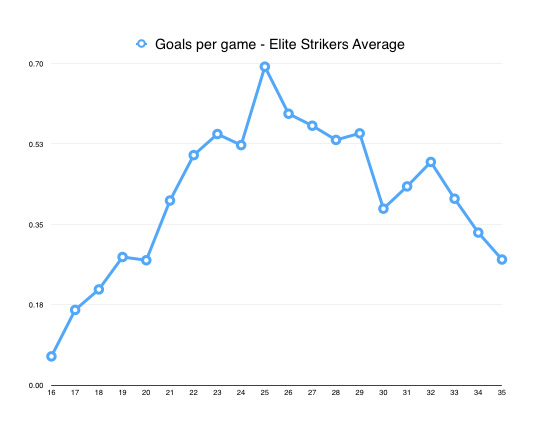 Next look at Sterling and Origi compared with Henry and Sturridge: all quick players who have played both wide and centrally. Of these, Origi has probably played in the worst team as a teen. You can’t say that the green and yellow lines will shoot up in keeping with the other two, but what you can say is that Origi and Sterling are no less natural as goalscorers than Henry, who was probably the best striker this league has seen in the past 20 years, and Sturridge, who is Liverpool’s new gold standard with the departure of Suarez. Even Alan Shearer, who never played wide, had an unremarkable goalscoring record before he reached 22. 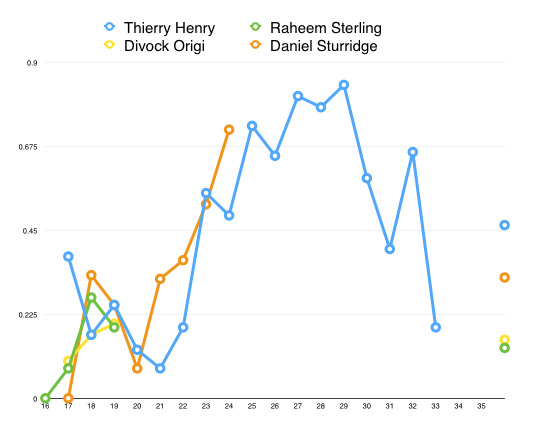 (For the record, I left out some prolific strikers; for example, Andy Cole didn’t even get a 2nd Premier League goal until he was 22; he got just one with Arsenal before dropping down to Bristol City and 2nd-tier Newcastle, with whom he went on to get his next 54 Premier League goals. I also didn’t include Michael Owen, who, unlike Cole, was an early starter. While I may go back and add more players, this collection seemed enough for now.)

I then looked at Cristiano Ronaldo, Steven Gerrard, Frank Lampard, Gareth Bale and Alexis Sanchez separately, as players who, like Sterling (and indeed Origi), were not out-and-out forwards (although Ronaldo and Sanchez have ended up there). Again, you can say that there is no cause to worry with regard to the two Liverpool youngsters, in that their careers as finishers are as ‘on-track’ as most of the mightiest were at 19 or 20. 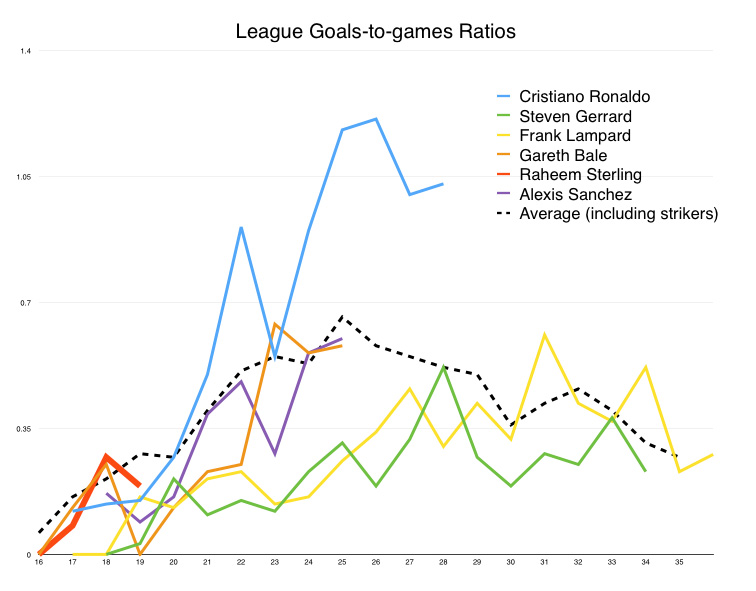 The ‘proof’ I offer in this piece is not that these players will go on to emulate the greats, but that you cannot look at the scoring record of someone at 19 or 20 and say they are not going to become hugely prolific. Indeed, Didier Drogba wasn’t even playing anywhere before the age of 20 (from which point he was a lower-league player in France for a few years), and Ruud van Nistelrooy, up until the age of 21, had a poor scoring record with the unremarkable Dutch club FC Den Bosch in the Eerste Divisie (the 2nd tier in Holland).

Look at all of the aforementioned players in this table of their teenage scoring ratios, for evidence that Sterling and Origi are perfectly natural performers for their age.

What seems clear is that the average scoring rate of someone at 20 (0.35 goals per game) ends up doubled by the time they are 25 (0.70). The big rises in prolificness tend to start happening around 21/22, although Robbie Fowler peaked at just 20. Lionel Messi averaged 0.34 – or a league goal every three games – in his teens, but since then has averaged 0.96 (or virtually a goal per game). Cristiano Ronaldo’s league goalscoring record in his teens was exactly the same as Sterling’s: 0.14; yet since then it’s been an astonishing 0.84. It took Steven Gerrard until his 20s – more than 50 games – to register his second Liverpool goal. Since then he’s scored a further 176. His scoring record as a youngster didn’t suggest he’d get more than four goals in his career, yet the way he took that first goal against Sheffield Wednesday was indicative of his potential greatness.

So we need to give players time to find their goalscoring knack. These could indeed be players on the verge of very big things.