No major surprises, personnel-wise, from either manager. Given the recent rise in form it was expected Rodgers would retain the same 3-4-2-1 formation and starting XI (only replacing the injured Lovren with Sakho).

Arsenal’s massive injury problems meant Wenger was stuck with the same XI, with the only change being that he welcomed Chambers back from suspension. Interestingly, the French manager played him at full-back with Debuchy retained as Mertesacker’s partner. Additionally, the Gunners reverted to a 4-1-2-3 formation. 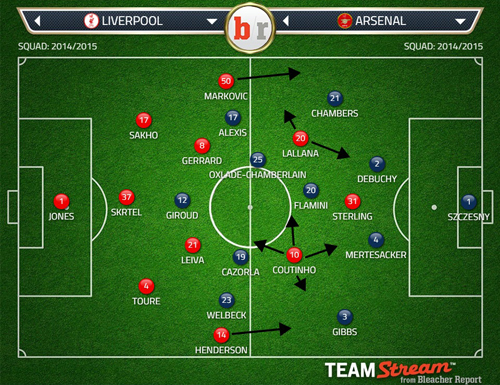 That both teams played with such contrasting formations only served to make the game tactically even more fascinating. Although either formation had its own strengths and weaknesses when set against the opponent’s, the clash clearly favoured Liverpool’s 3-4-2-1. This was because of its ability to either ensure total domination on the ball or play reactively and have a clear route to counter-attack dangerously.

The former was possible due to the back five unit allowing the team to beat any pressing and play out successfully. Meanwhile if Liverpool wanted to, they could’ve easily dropped deep in a 5-2-2-1 shape, cover Arsenal’s attacking threats (wing-backs on their wide forwards; the attacking midfielders drifting wide to pick up their full-backs) and wait for chances to involve their roaming front three on the break.

Liverpool boss possession early on, both teams blunt in attack

That Liverpool opted against sitting deep and letting Arsenal get on with their play wasn’t a surprise at all. Not only was it at Anfield and the Reds badly needed a win, but also with Rodgers supposedly being a front-foot manager, it was clear Liverpool would not be as reactive right from the start.

However, the way the game started it become clear the home team would not be pressing fiercely and attacking as directly as they did at Old Trafford. Instead, Liverpool focused on extra ball retention, obviously willing to settle into possession control and take it from there. In the rare periods where Liverpool was not in possession, they focused their pressing more towards the midfield zone. The Reds gave Arsenal time and space to play the ball across their back line but quickly sprung into life, closing down aggressively and in numbers, once the ball was played into midfield. It seemed like Liverpool preferred to lure Arsenal high up and encourage them to involve their full-backs in their attacks before using their central bodies to suddenly spring into life, quickly crowd out the midfield third and initiate aggressive closing down. The potential benefit of this was that there would be more space for Liverpool to break into, as the Gunners would have been caught midway through their transitions.

Liverpool quickly settled into total possession dominance, partially because Arsenal did not look to press them. Nevertheless, even if the visitors opted to do so, the Reds’ approach to build from the back would have seen them boss possession anyway. Not only did the home side have extra numbers to safely pass the ball, but also tactically, the team had a very suitable structure to ensure this. It was often the case that Gerrard and Lucas joined the side centre-backs and the wing-backs, creating a triangle down each channel, within which the team could pass and move the ball forward. This left Skrtel – as the middle centre-back – as the spare man, acting as the insurance policy if the move breaks down to limit the danger of being caught on the break. Additionally, Skrtel and Jones were always there to receive back passes and start the recycling process again in case the triangles couldn’t work the ball forward.

What’s more, the presence of two roaming advanced midfielders gave Liverpool the required midfield presence. Coutinho and Lallana roamed in a way to help connect the side to ensure the next phase of possession play is initiated. 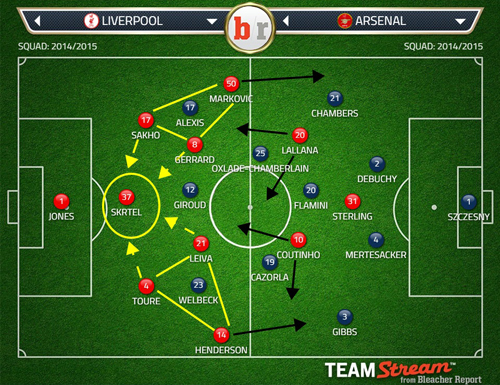 However, for all their possession – midway through the first half it reached 80% – Liverpool struggled to be a potent threat going forward. This was partially because with them bossing the game, Arsenal logically had to retreat and focus on defending. As a result Mertesacker and Debuchy stayed deep most of the time, which nullified Sterling’s main threat – his pace in behind.

Game On For Gloves, New Pitches For Tempo