Roy Hodgson, The Ex Who Won’t Go Away

Roy Hodgson, The Ex Who Won’t Go Away

After a bad breakup, you really don’t want to keep running into your ex. And following a particularly messy divorce, where the other party seemed slightly unhinged, it’s hard to entrust your little ‘uns to them for the week. Right now, Roy Hodgson seems to be dropping the baby, as well as the ball – and maybe even a bollock – when it comes to Liverpool FC. Everywhere we turn, there he is, haunting us. Weren’t we supposed to have seen the back of him? It’s like waking up and finding your ex-spouse in bed beside you. Frankly, a horse’s head would be preferable.

First of all, back at the start of the season, Hodgson forced Daniel Sturridge to train in a manner that was contrary to the player’s fitness plan; and, lo and behold, Sturridge hasn’t played since. What we learnt is that if you loan the England manager a new Ferrari he’ll fill it with the wrong petrol and wonder why it no longer drives. He wanted to ‘test the resolve of Daniel Sturridge’ in the way a toddler wants to test the integrity of his nappy. If it bursts, who’s gonna clear it up?

Hodgson then made some bizarre comments about the Liverpudlian accent not being suited to eloquence, as his saggy arse-mouth shat out another dirty pearl. He may not have meant to cause any offence, but it was hardly an advert for his own verbal skills. 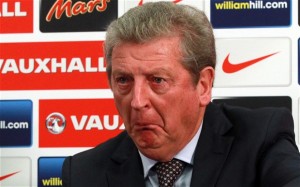 Now Hodgson has hung Raheem Sterling out to dry by telling the world that that the teenager “felt tired”; too tired to represent his country. (You’d never have heard Stuart Pearce saying that.) Cue mass hatred towards Sterling, who, presumably, was asked a question by his manager (which Hodgson did well to act upon) and then ‘outed’ in a way that would call his commitment into question. Sometimes you sense that Hodgson would be a better manager if he was mute. Or lost in Scandinavia.

Did Sterling need that? It’s not easy being a mere lad who carries the hopes of club and country. Wayne Rooney had to do it for a while, and have you seen the state of him?

Reading some of the reaction on Twitter, it seems that professional athletes aren’t allowed to feel any form of fatigue; they must be 100% fit 100% of the time, or 100% injured. There are no shades of grey in the world of online outrage. “He’s a professional athlete!” they shout, as if it makes these young men impervious to the conditions that might stop them doing their job (or at least stop them doing it as well as they might otherwise have hoped.)

If a manager is going to ask players how they feel, then he presumably doesn’t want them all to say “I’m great!” irrespective of the truth. What we do know is that if it’s a particularly big game, players will lie their faces off to be part of the action; and then, 10 minutes into a major final, they’re limping off, and the manager only has two subs left. Do you want that?

An Anniversary, Luis and the Price of a Pie ...