Il-Re Calcio means football is king. Football reigns over many other sports across the world. During the World Cup, football rules over governments and countries, regardless of geography. Football is the hierarchical dictator of sport, and with its current governing bodies, reflects everything that is wrong with a monarch-based authority. Crucially though, and highlighted in this collection of short stories by Paul Grech, football is king for many other reasons: its simplicity; its appeal to the masses; its ability to test and expose the social structures and bigotry; the vast array of compelling characters that have owned clubs, managed clubs, and of course, the main characters: the players. 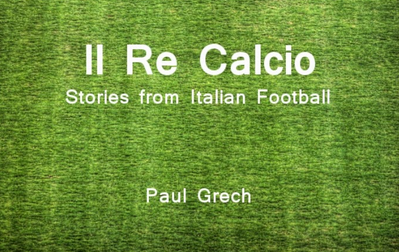 This book encapsulates the often ignored gems within the history of the Italian game: the tactical genius; the forgotten – and perhaps equally talented – cousin of the World Cup hero, whose tale, involving pre-match drug taking, is one of sadness rather success; a forbidden love story and a failed career. Torino, a European final against a young Van Gaal’s Ajax, and the secrets behind their success and eventual failure. The target man who didn’t make his Serie A debut until he was in his thirties, but for a brief period outshone the great Ronaldo.

Tomkins on Balotelli, Valdes and Gerrard (and More)