Both teams largely lined-up in the expected manner, both formation and personnel wise.

The home team kept their XI from the Hull game, with the only change being Song making his first start for his new club. Zarate made way, with Downing placed at the tip of the midfield and Song slotting in as the left shuttler.

On the other side, Rodgers made three changes following the Ludogorets game. Sakho, Coutinho and Lallana were moved out of the starting XI, with Skrtel, Lucas and Borini coming in. The change to two up front meant one of Borini and Lambert had to start – the former got the nod, perhaps due to his greater mobility. Then with Coutinho missing, only Lucas remained as a potential central midfielder (Rodgers strangely continues to ignore Sterling for the role as one of the two shuttlers in the diamond formation, more so with Lallana and Markovic capable of playing as the advanced midfielder). With Skrtel brought back in the starting XI as soon as he returned to fitness, Rodgers made the obvious declaration that he sees Lovren and the Slovak as his first choice centre-back pair. 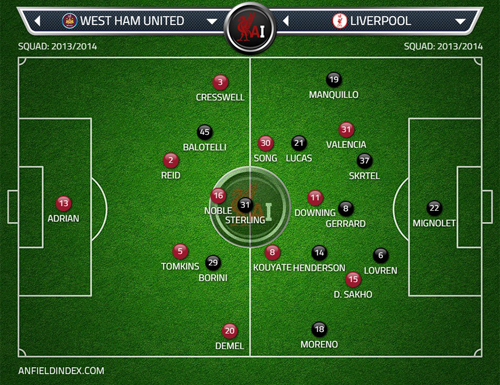 The game was fascinating on so many levels. First, this was the first time in recent memory where both teams from the EPL started with the 4-diamond-2 shape. It served to confirm the recent diamond-mania is in full flight. The immediate tactical interest was how both teams interacted playing the same formation differently, and if either of them gained any kind of advantage. Then,  it was the way the game continually progressed tactically, with both managers’ peculiar line of tactical thinking and decision-making the main talking point for the rest of the game.

It is a well-documented fact that when both teams play with the same formation they largely cancel each other out. This is because the players are often matched man-for-man all over the pitch, with only the full-backs (if the formation uses a back four) being the de-facto spare men. The only exception is when a 3-5-2 plays a 3-5-2 – in this case every single player is being marked by a direct opponent, with no-one being a spare man or operating within a greater space from a pure positional point of view. Here it was a case of each team’s midfield diamond cancelling each other out, with the two sets of forwards playing up against the opposition’s centre-backs. It was only the pair of full-backs that theoretically received a huge amount of space and were not being marked directly, nor able to engage each other as they’re all starting from a relatively deep position. This meant they were far from each other (it was only when one of the team manages to get a hold of the ball to then allow time for them to push on, when the full-backs were close to each other, engaging in a traditional battle of a winger vs full-back down both flanks).

In such a scenario – both teams cancelling each other in terms of a formation match-up – the individual roles and performances and the players’ tactical capacity within the overall set-up to offer the required extra positional fluidity quickly becomes the key aspect.

West Ham’s XI and the players’ exact positioning predisposed two main advantages: first, it was about Song and/or Kouyate playing against Lucas to dominate physically and support his team’s attacks. As it was, Song played on the side of Lucas, which was the better option for West Ham as the Cameroonian is able to both play creative passes and surge forward  off the ball. The second obvious advantage for the home team could have come – and indeed came – from the Downing-v-Gerrard individual battle. Downing played a very intelligent role against Liverpool’s captain, continually drifting either side of him and forcing him to either follow him or leave him free to join the full-backs and the rushing from deep shuttlers to work out potent passing moves in Liverpool’s half. With Gerrard’s notorious defensive shortcomings now further enhanced by his obvious fatigue (starting his third game in seven days, after playing 90mins in the previous two). As a result the Reds’ captain seemed unable to deal with the movement of Downing; a couple of times even being embarrassed by him in a direct duel.

For Liverpool, the diamond against diamond scenario did not look as bad before the game. This is because of the following aspects of their play being easily achievable: with Lucas on the pitch, the team should have had four players – the centre-backs, Gerrard and him – sitting behind the play and offering the required increased positional cover against any potential West Ham breaks. This meant that the theoretical danger of seeing West Ham’s front pair playing 2-v-2 with Gerrard troubled by Downing (or whomever was to play in that position) was minimised with Lucas able to drop in and offer the extra layer of protection. That would have put extra onus on Henderson to surge forward in attack and provide the required vertical runs from midfield – to  compensate for the lack of the other shuttler being a viable threat – more so when he was tasked with such a specific defensive role. In addition to this Sterling was expected to drop in to the side of where Lucas is playing and provide the missing link-up play. Sterling dropping deep would have been a useful thing in case West Ham tried to press from the off – something that was potentially going to exploit Lucas’ lack of mobility and quick passing.

In terms of pressing, even without the other shuttler being capable to press hard from ahead, Liverpool should still have had enough options. With Lucas sitting deep and joining the other three to cover, it would have been a case of seeing the full-backs pushing on and joining the front three and Henderson to spread out and arrange a suitable pressing framework without risking leaving too much space in behind.

Another question was whether the team would still be able to attack dangerously. The players needed to adjust to the fact Lucas was not going to be a threat in attack, because using his deep-lying position should have freed up the rest of the attacking players. As a starting approach, having the other six players able to combine well on and off the ball would have been enough. More so given the fact West Ham were starting with a 4-diamond-2 formation too. However, the success of this was dependant on the players being prepared to function in such a coherent manner and offer the following attacking patterns.

The nature of Liverpool’s front three players allowed for quite different and  potentially successful movement permutations. With Borini and Balotelli both mobile enough, they could drift wide to stretch West Ham’s centre-backs and allow space for Sterling to charge forward from deep (it was clear Noble, their deep-lying midfielder, wouldn’t have been able to stop Sterling either on or off the ball). The other possibility was to see one of the forwards drop into the space between the lines, leaving the other to work the channels. This would have stretched West Ham’s back line in two different directions, taking Noble out as the main cover player. This would have left plenty of gaps for Sterling and Henderson to exploit with their sudden vertical surges. Here, with the front four ‘splitting’ their movement in different directions and from different angles, the team would have been able to threaten with all of the required vertical, diagonal and lateral type of off ball roaming. Another variant was to see Sterling drifting wide to create overloads with the full-backs, leaving the other three (Henderson and the two forwards) to rush into and flood the penalty area, waiting for suitable crosses, cut-backs etc.

On paper, Liverpool had the tactical capacity to look good defensively, deal with the potential incoming West Ham press, and then have the resource to threaten in attack in far from a one-dimensional way. For whatever reason though – lack of enough time to properly tactically prepare the team to perform in a specific way, in all phases of play, based on this XI; accumulated fatigue; lack of rotation; or, poor overall form. Liverpool struggled to offer anything resembling what the team was on paper able to offer in terms of defensive stability, build-up play, offensive threat etc. Sure, the two early goals were logically quite a blow for a team currently in low confidence due to a run of poor performances. The main problem though, was that even without the goals, Liverpool displayed certain tactical issues that would bother the team no matter what. In fairness, it should be noted that the goals didn’t come due to how the team was set up tactically. Once again, it was more to do with poor individual reactions and play in the given situations. The problem though was that the subsequent open play struggles were precisely due to Liverpool’s tactical issues and arguably would have been evident no matter the score line.

The opening 20 minutes – diamond vs diamond

With the way the game started it was clear Liverpool’s behaviour was no way near what the team looked able to display with this XI in that formation against this opponent. There were certain issues that prevented the Reds performing anyway near their theoretical capacity.

The first obvious issues were the total lack of midfield movement coupled with the slow passing rhythm. It is hard to say which one influenced the other more, but it was clear on both fronts that Liverpool struggled massively. The main problem was that Lucas and Henderson remained surprisingly static and didn’t offer the required passing angles. Although this is nothing new for the former, the latter seemed far from his buzzing and industrious self. Both of them largely stayed ahead, rarely dropping deep to make the connection with Gerrard. It could have been a case of the two of them and Gerrard creating sort of a lopsided 1-2 midfield with Gerrard sitting central and deepest, Lucas a bit higher and to the right and Henderson as the most advanced to the left. This would have allowed natural passing angles without the players putting in any extra efforts to roam around. Nevertheless, in reality it was like a ‘broken’ trio with Lucas and Henderson rarely moving around and only sporadically dropping deep to offer a short passing option. 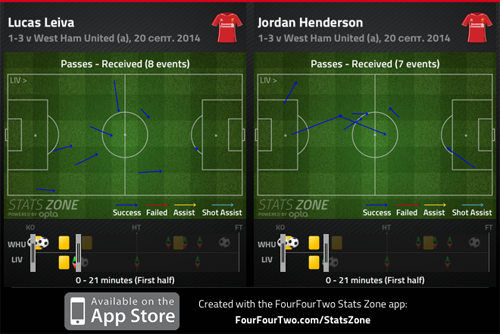 With the shuttlers not offering the recyclers viable short passing angles to connect the side through the middle, there was no onus on Sterling and the full-backs to help out. With West Ham obviously geared up to press and push many men in the middle third inside Liverpool’s half – which further restricted the slow and ponderous Lucas and Henderson from providing any passing angles – Liverpool could have applied the same approach they used in the Tottenham game. Back then, with the Reds obviously anticipating Spurs to focus on pressing hard in the midfield zone, Rodgers had his team displaying two main approaches as to how to bypass that zone and not risk being pressed to lose possession or be pinned back right from the start. Exactly the same strategy could have been used here.

TTT Podcast Episode 6: Back to the Future