As the transfer window closed in early September it was possible to draw the first conclusions about what could be expected for the season based on TPI (Transfer Price Index ©). All figures below are based on current values, so the the latest inflation figures have been applied (using the inflation index of all transfers in the relevant season).

Amidst all of the hype in the Sky Sports studio, it was clear from an early stage that all records were about to be broken. Man City were hamstrung by FFP regulations and so were unlikely to spend significantly in an attempt to defend their title, but below them Chelsea and Liverpool had sold expensively (David Luis and Luis Suárez respectively) and so had funds to spare, whereas Arsenal wanted to cement their position in the top four, with Man United expected to spend heavily to regain after they missed out on European football for the first time since football began – as Sky Sports would have you believe. All this came with the first influx of money from the new increased television deal.

When the dust settled, there had indeed been a record amount spent, more than the entire season last year (the summer and January windows). Towards the end of the latest window there was a rash of loan deals, but surprisingly there were fewer than last season’s end of year total, with fewer than 30 such deals compared to over 40 in 2013-14. 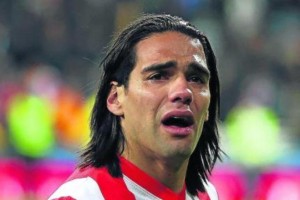 Even though Man Utd were the biggest spenders, their overall squad value Sq£ (the total cost of the squad in 2014 money) only changed marginally. In losing Ferdinand they are now without one of the costliest players of the Premier League era (his 2oo2 fee of £30m is enormous once inflation is applied), and so even with large outlays on several attacking players, van Gaal will only see an increase of £17m in the value of his squad (after inflation), which was valued at a shade under £650m. Even so, this put them ahead of the previous most expensive squad in Chelsea, who dropped from £680m to £598m, despite making several big money signings. A series of sales of mid-range valued players contributed to a declining Sq£, with Luiz, Mata and Cole being the largest of them. Torres is technically still available, as he is merely out on loan, but if he doesn’t play for Chelsea this season, as seems almost certain, he will further reduce their Sq£ by some £70m. Is FFP really beginning to bite at the Bridge?

What a wastage of money

Towards the end of last season I introduced a new concept – Wastage – where a team fails to use the full value of its squad.

This season, if Chelsea field their most expensive XI each week, they would have players sitting on the bench or in the stands with a combined value of £190m. United on the other hand, will have £185m on the bench, but to achieve this they would have to field Anderson (£35m), Fellaini (£30m) and Young (£29m) in every game, and that’s not gonna happen.

By comparison, Man City have been frugal, with a net spend of £24m, almost the same as Liverpool (who had the benefit of the big Luis Suárez sale). As a result, City’s Sq£ decreased by £18m, but Liverpool’s increased by £59m (Suarez’s 2011 fee, in 2014 money, is removed from the squad value, with nine players bought with actual 2014 money added).

City’s wastage, if the most expensive £XI start every game will be just £87m, indicating that they have invested more in a strongest XI policy, rather than expensive squad depth. On the same measure, Liverpool would have a wastage of £85m, but this is without Gerrard – a “freebie” – playing a single game, so it will of course be much higher. Both teams have 22 players who had a transfer value, but Liverpool have eight (against City’s four) free transfers or trainees to give what appears to be a large, more balanced squad.

Arsenal, the fifth team of the big spenders, did not really over-stretch themselves as they added a net £46.1m to their Sq£, adding Sanchez, Chambers, Debuchy and Welbeck, plus a couple of other squad players, and only selling one player with a TPI value, in Vermaelen (Bendtner and Källstrom had no value). Clearly Wenger is looking to make only minor changes, but as demonstrated with Giroud’s injury, they might be a bit threadbare if they suffer any further damage.

Best of the rest

Aside from these five, the team with the largest addition to their Sq£ was surprisingly Aston Villa. The sole reason for this was Darren Bent, who has a current value of £34m. Last season he failed to make a single appearance for his parent club, whereas this season he has already turned out for the Midlanders; so their squad value has increased as a consequence. Southampton also increased their squad value (by £35m), but this came after they had lost many relatively cheap players (when they purchased them) to Liverpool and Arsenal, and replaced them with Tadic, Long and Mane, who cost more than what they once paid for Lambert, Lallana, Lovren, Shaw, et al, but less than they received when selling those stars.

So where did this leave us? Not surprisingly Burnley and Leicester have the two lowest value Sq£. The other promoted team, QPR, ranks mid-table thanks to their expensive acquisitions during their previous stay on the top flight. The other relegation place, based on this metric, seems to be a straight fight between West Brom and Crystal Palace.

How was the money spent?

Age – in the younger category (16-20 years) the average value of a transfer increased in one season from £2.2m to £5.1m.  This almost all arose on account of one signing, Luke Shaw, moving from Southampton to Man Utd, although other youngsters, like Chambers and Markovic, were over £15m. This is the highest ever price for the age category. There were similar although less pronounced increases at the other age categories as well, the largest being in the ‘experienced but U30’ category (26-30) which increased from £3.2m to £5.4m. Were United’s signing of Falcao a permanent deal, this would have increased even further.

As you can see, this is the last time players have a high transfer value, so there are always concerns about resale value if these deals go wrong.

Position – there were modest changes in Midfield and Attack, but the largest change came in defence, which increased from £2.4m to £6.7m, as clubs struggled to identify quality defenders. The total value spent on the back line was £249m, more than three times the value of last year for a small increase in the number of such transfers.

Origin – As always the highest volume of transfers was for UK nationals, but the average cost was less than half of any of the other geographies. A UK player costs £4.0m on average, whereas EU and rest of the world players cost £8.2m and other Europeans cost £9.4m. If there is a premium for players it is probably for UK based foreign nationals, rather than UK born players; or for the elite English players going to the top clubs, rather than the journeymen who end up at many other clubs.

How are we progressing?

Three matches down, thirty five to go. Yet already, Chelsea, City, Liverpool, Arsenal and Spurs are in the top seven, despite several of them having already met each other. And at the bottom – Burnley, Palace and West Brom, as the above table indicated, with Leicester only just keeping their head above water. Eleven teams are just two places away from where they can expect to be at the end of the season based on their £XI. Almost 57% results have gone according to form, Man Utd being the main exceptions, but surely this will turn around. So far their points have come at a cost of £10.5m each; anything over £2.5m per point is considered poor historically.

Their season started badly, their £XI against Swansea having a £225m advantage (over 6.5 times that of their opponents) but they struggled for balance. At Sunderland the values were narrower, but still £188m in their favour, whilst against Burnley they had £260m in hand with a team costing 50 times that of their opponents, yet on none of these three occasions could they leave the field with three points.

By comparison, the other major shocks were much closer, City having a value seven times that of Stoke and Arsenal five times Leicester’s.

It’s early days, but so far TPI, while not a perfect model (no model ever is), looks to be as accurate as ever in predicting the final finishing positions.

TTT Podcast Episode 5 - Getting Back to Business