Liverpool returned to Champions League action with a 2-1 win over Ludogorets on Tuesday evening and next up for Brendan Rodgers’ side is a trip to the Boleyn Ground on Saturday – 5:30pm kick off UK time – where Sam Allardyce’s West Ham United lie in wait. The Reds are in a busy period, with a League Cup tie against Middlesbrough next week and the derby against Everton the following Saturday, set to test our squad. 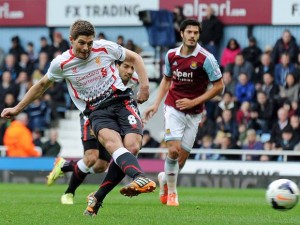 The Hammers have yet to pick up a point at home this season losing to both Spurs (0-1) on the opening weekend and Southampton (1-3). Their last Premier League match ended in a 2-2 draw with Hull City at the KC Stadium on Monday evening. Liverpool won the corresponding fixture last season 2-1 thanks to a brace of penalties from Steven Gerrard, making it four wins from our last five visits to West Ham in the league.

Liverpool suffered a surprising – or not if our recent record was viewed – defeat at Anfield against Aston Villa last Saturday, leaving us with two wins and two defeats from our opening four league games. As disheartening as the result and performance was, only Chelsea with four wins from four (all against mediocre opposition) can boast a flawless record amongst the other teams who made up the top four last season. Reigning champions Man City have a record of won two, drawn one and lost one (including a home defeat) while Arsenal have won one and drawn three, but it’s too early yet to get a clear idea of who the real challengers will be for the title. One thing that a Liverpool side under Rodgers has shown is that we are a far more formidable side in the second half of a season.

If we beat the Hammers on Saturday we will have nine points from five games. Our points total after five games last season? 10.