Saturday’s first Merseyside derby of the season marks the 191st league meeting between the two sides – the 223rd encounter in all competitions. With both sides having made a less than impressive start to the season – with the Reds occupying 11th and the Toffees in 14th after five games – whoever picks up maximum points will gain more than bragging rights. 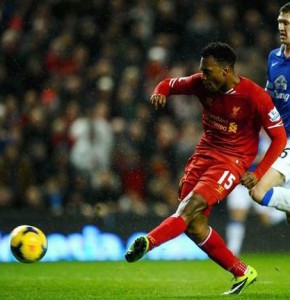 Liverpool suffered a second consecutive league defeat going down 1-3 at West Ham Utd last Saturday and will be hoping to avoid losing three in a row for the first time since the second half of the 2011/12 campaign. The Toffees suffered a 2-3 home defeat against Crystal Palace last weekend but are still unbeaten on their travels having drawn 2-2 at Leicester City on the opening day and secured  a 2-0 victory at West Bromwich Albion, their only league victory of the season so far.

Liverpool won the corresponding fixture last season 4-0 – stretching our unbeaten league run against the Toffees at Anfield to 14 matches – with goals from Gerrard, two from Sturridge and one from Suarez.

Both teams were in League Cup action on Tuesday evening with Everton going down 0-3 at Swansea while Liverpool were involved in an epic tie with Middlesbrough with the score finishing 2-2 after extra-time, before eventually winning a penalty shoot out 14-13 – the longest shoot out in League Cup history – as Tuesday pm was fast heading towards Wednesday am.

Steven Gerrard should make his 32nd derby appearance, which would put him four appearances behind Ian Rush who has played in more Merseyside derbies (36) than anyone else in a red shirt. Rushie has also scored the most goals in this fixture for Liverpool with 25, while Gerrard is next on the list with nine.