The Making of Markovic?

The Making of Markovic?

That’s what Serbia’s caretaker coach Ljubinko Drulovic believes. He says Markovic’s transfer to Liverpool can help him become one of Europe’s elite players:

“Going to a very strong league will help him even more to become a major player worldwide.

“He’s 20 years old and has a long time to play. Markovic could prove to become a very important player in Europe.”

After completing a medical and the formalities of his switch at Melwood, Markovic told Liverpoolfc.com:

“I am very happy that I have joined such a great club.

“I watched every game (last season) and Liverpool played absolutely superb. It is a shame they did not win the title – but I hope we will win it this season.

“This is an exciting signing for us and one that improves our squad, in terms of attacking options, for the coming season.

“He was hugely impressive for Benfica last season and has proved he has the ability to produce the goods in European competition as well, which will be important for us.

“Lazar is flexible to play a number of positions, but I like the way he attacks games and is always positive and looking to make something happen. He will fit in with the way we play at Liverpool.

“Getting him at such a young age is also very pleasing for us, because we will be able to work with him to develop his talent within our group and improve him even further.

“He is the sort of character who is hungry to get better and progress; this is what we look for in players.”

So what do we know about Lazar Markovic? For a start, he can play as a striker or a winger, and has been described as ‘a player with exceptional qualities and impressive acceleration (Wikipedia), easy on the eye, fleet of foot and a constant menace in the final third, where he can run at defenders or pick apart a defence with a pass.’

Here are some stats compiled by our very own Krishaldo: 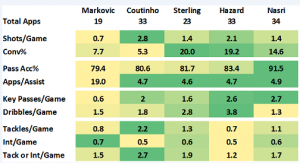