No Player is Ever the Same Twice

No Player is Ever the Same Twice

Or, no player, once placed into a different team, is ever the same player again. He is merely a different version of what he was; surrounded now by better or worse players, playing in a style more or less conducive to his talents, on a wavelength with all, some or none of his team-mates.

A player in a mid-table side may excel with better players around him once he moves to a big club. Or he may struggle as a smaller fish in a bigger pond. He may see more of the ball because his new team dominates possession, or he may see less of it, because he’s no longer the fulcrum. He may be inspired by his new surroundings, or, by contrast, lay awake at night, daunted by the prospect of running out in front of 40,000 fans. He may thrive on the kudos of being a £35m player, or find it akin to carrying around a millstone in the shape of Andy Carroll. With age and experience he may get better, or he may lose his hunger (and his knee cartilage).

Once placed into a different team, he may appear better, or he may appear worse. But he’ll rarely, if ever, appear exactly the same.

Think of John Barnes with England, and how, against even British-based sides like the Republic of Ireland, he rarely looked special; yet could turn those same defenders inside out on a Saturday when wearing the red of Liverpool.

Think of Lionel Messi with Argentina, and how, despite a pretty good (if ultimately unspectacular World Cup), he still doesn’t look a fraction of the player he was at Barcelona. Messi probably faces better defenders in La Liga than he does in many international matches, but his role with the Catalans has always suited him better, as have the players around him. Argentina don’t have the same swagger and control as Barcelona at their best. They play in different styles. So why would Messi be the same in both shirts? 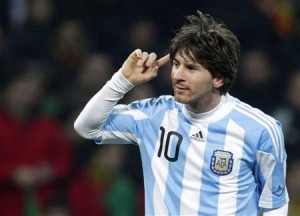 Think of Neymar – the inverse of Messi – who looks better for his country than his club. For Brazil – at least until he ended up in a wheelchair – he was the main man; for Barcelona he looked in Messi’s shadow.

Think of Ian Rush in Italy, his cupboard full of baked beans but the onion bag rarely bulging. Think of Shevchenko in Milan and then, as if the King’s Road was his kryptonite, utterly powerless in blue. All the same human beings, right, once they’d swapped teams? And yet their performances were never the same.