Dana Scully, Rickie Lambert and the Power of Schemas

Dana Scully, Rickie Lambert and the Power of Schemas

The hardest thing to see is what is in front of your eyes.

In my younger days I can remember being continually frustrated with Dana Scully (for different reasons than the majority of teenage boys I’d imagine). My frustration stemmed from the fact that no matter what she would see or what evidence Mulder would find of something paranormal she would not accept it. Typical exchange:

How could someone be so blind and not see what is right in front of them? It couldn’t happen – not the spaceships part, the not seeing what is staring you in the face part – in real life though could it? Well yes it does frequently, and in every area of life to some extent. The reason Scully could not see what was before her was the power of schemas – cognitive frameworks or concepts that helps us to organise and interpret information.

Schemas can be useful because they allow us to take shortcuts in interpreting the vast amount of information that is available in our environment. However, these mental frameworks can also cause us to exclude pertinent information to instead focus only on things that confirm our pre-existing beliefs and ideas.

I was reminded of the potent power of schemas in football recently when Liverpool first began to be linked with Adam Lallana. Whenever Liverpool are linked to a new player, I have a ritual that goes like this: I watch every video of them I can get hold of and read anything I can about them to try and see what qualities they might bring to the team (I know; sad but true). Anyway when we were first strongly linked to Lallana, who I already liked as a player, I began my usual routine of watching videos of him and Southampton playing. Whilst doing this, an internal dialogue began to occur on the very edge of my awareness about another of their players – and now another of our players –  Rickie Lambert. It went something like this:

That was an alright pass from Lambert

That was an alright touch from Lambert

That was a good pass from Lambert

That was a good touch from Lambert

That was a very good pass from Lambert

Lambert seems like a good passer for a target man

As the good passes and touches continued…

Lambert is actually an alright footballer

Lambert’s got quite a few good passes in his locker

What a brilliant pass from Lambert.

Why was I having this internal mental struggle over the abilities of Rickie Lambert and why was my initial judgment of him so harsh? 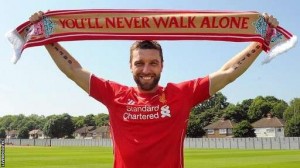 It was a demonstration of the power of schemas. Schemas have been described as:

a cognitive framework or concept that helps organize and interpret information. Schemas can be useful because they allow us to take shortcuts in interpreting the vast amount of information that is available in our environment. However, these mental frameworks also cause us to exclude pertinent information to instead focus only on things that confirm our pre-existing beliefs and ideas. Schemas can contribute to stereotypes and make it difficult to retain new information that does not conform to our established ideas about the world. http://psychology.about.com/od/sindex/g/def_schema.htm