The Problem of Luis Suarez and Two Tribes

The Problem of Luis Suarez and Two Tribes

One thing that has bothered me in the past when defending Luis Suarez – or, if not defending, at least, asking that he be given a fair trial and a punishment commensurate with his ‘crimes’ – is that I got dismissed by many for being part of a tribe, and not seeing things clearly.

Well yes, I am part of a tribe. But then so too is everyone else. As you’ll no doubt know, I’m in the Liverpool FC tribe (and in other tribes at other times, such as the Bald Community, as outlined by Larry David in Curb Your Enthusiasm).

My issue is that no-one takes ownership of the tribe they are in when condemning Suarez, or Liverpool fans. And yet there are always two tribes: us and them. 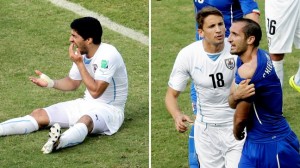 If you’re a football fan who doesn’t support Liverpool, chances are you’re in the anti-LFC tribe at certain times, just as, if some crazy shit goes down at Southampton or Spurs or Swansea – clubs we have no real beef with – we, as outsiders, will pounce on their misfortune, or get outraged about something that we want to see punished (partly for the thrill of watching something kicking off at a safe distance, like a fight in the corner of a pub; partly because we want to see anyone who could do well against our team banned for as long as possible, perhaps even deported).

It doesn’t have to be about hatred and rivalries; this isn’t about Liverpool against Manchester United. If you support Millwall, or Reading, or Crewe Alexandra, you are united when there’s something to be ‘outraged’ about at another club. And if it’s a big club, there’s that extra sense of ‘well, they deserved it’. Schadenfreude is an ever-bigger part of the football experience. Indeed, it’s also part of our TV programming and takes up a fair chunk of our tabloids. Everything is geared towards conflict, as it makes good telly and sells newspapers.

If you don’t like football, then you are in the anti-football tribe. You’ll use something that happens on a football pitch – such as one man biting another – as proof that the game is out of control; that it’s barbaric. While we expect better behaviour when there’s a global audience, it’s fair to say that a million worse things happened around the world the other night: rapes, murders, serious assaults, child abuse and neglect, drunk driving, drug-pushing, and countless financial scams that will leave people without homes, jobs or maybe even lives.

Football is tribal, but so is life. The Guardian has its tribe, just as the Daily Mail has its tribe. We may favour one over the other, but these days, if you’re not for something, you better bloody-well be against it. The man and woman on the street aren’t interested in indifference – or aren’t thought to be, at least; they have to feel love or hate; compassion or condemnation.

Luis Suarez bit someone, which is wrong. It’s not nice to see. But he didn’t maim them, or rape them, or kill them. No-one was seriously hurt, or was ever going to get seriously hurt. You shouldn’t bite someone on a football pitch. But one football pundit – Danny Mills – said that Suarez deserves locking up for life. Even the sickest criminals rarely get such a sentence. Had he still been alive, Jimmy Saville wouldn’t have got a life sentence, and he raped little girls and allegedly had sex with corpses.

People find biting disgusting, and maybe it is; but once we start getting onto the subject of ‘disgusting’ then everyone is different. I find eating insects disgusting, but in some countries it’s a staple. I don’t find eating parts of a cow disgusting, people from other cultures (and vegetarians) do. And yet in Britain we’re not disgusted by a deliberately-swung elbow to break nose, jaw or cheek.

Biting is a primal instinct, something children do and then usually grow out of. And yet so too is forming a gang – a witch hunt, if you will, dating back well before the existence of witches – to drive the outsider out of town.

Someone noted in the comments section of TTT that if John Terry had done this we’d be up in arms. And he was right – we probably would; because John Terry is not only not part of our tribe, he’s seen (as captain of a rival club) as a threat to it. We’d have got it all out of perspective, because what’s better than John Terry getting a two-year ban for some low-key violence? We’d have been high on the scent of blood, readying our pitchforks and sharpening our sense of moral outrage.

Here’s a thought. Ex-Premier League striker Marlon King gets an easier time in England than Luis Suarez. He’s not as famous, obviously, but he doesn’t elicit the same tribal responses because he’s English, and doesn’t play for such a high profile club. He’s certainly not a threat to Premier League sides, or the English national team; he’s merely a threat to the general public.

Here’s part of his rap sheet:

“As of October 2009, King had convictions for 14 offences. Three cases led to imprisonment. In May 2002 he received an eighteen-month prison sentence for receiving stolen goods, in relation to a BMW convertible that he was found driving, but was found not guilty of a charge of assaulting a police officer in a related case. Gillingham continued to pay his salary while he was in jail, and supported in his appeal, which resulted in the sentence being reduced to nine months, with King being released on licence after five months, returning to the Gillingham team within two days of his release.

In December 2008, again in the Soho area, King was arrested on suspicion of punching a 20-year-old female university student in the face, causing a broken nose and split lip for which she was treated in hospital. He was later convicted of sexual assault and assault occasioning actual bodily harm, and sentenced to 18 months in prison and placed on the Sex Offender Register for seven years.

King was arrested and bailed once more in April 2013 after a car crash which left one man seriously injured, and in July of the same year, he was again arrested in connection with a hit-and-run incident which had left a second man injured.”

King is now back in jail, serving another 18-month term, but was still playing in the Championship last season. Coventry, Birmingham and Sheffield United all employed him despite his record as a woman-beater, car-stealer and sexual offender. Then there’s Lee Hughes, who killed someone with dangerous driving, and later played for a number of professional clubs. And yet I expect a fair few fans of all those clubs are amongst the millions up in arms as Suarez’s bite.

Plenty of footballers have (allegedly) been involved in gang-rapes, assaults, match-fixing (that defrauds thousands of paying customers and thousands of betting punters), and other far more serious incidents. They may not happen on the pitch, but they still get to play football without mass hysteria following them around. Suarez is part of the “dirty foreigner” tribe, and a target for anyone in the upright, moral English tribe.

For me, it seems that Suarez is not so much a “winner” as someone who cannot take losing; or rather, that he takes it incredibly personally. Which Liverpool player was most upset by the Reds not winning the league? As you’ll recall, Gerrard was upset but Suarez was inconsolable. Psychologically speaking, it’s as if his entire world crumbles if his team loses; and it’s even worse if he’s the leader, the talisman. That’s not healthy, but it is part of what makes him a remarkable player.

Clearly it needs to be slightly recalibrated, so that the good isn’t lost but the bad is toned down to acceptable levels (even if he doesn’t go around doing really bad things like trying to break legs to win games). Remember, he’s not ended anyone’s career, put someone in hospital, risked anyone’s life.

He plays on a knife-edge, and yet that knife is too sharp. He fears that if his team loses, it’s the end – he falls, and is sliced in two. And yet he makes mistakes that ultimately cost his teams their best player. In the situation – where he’s opening his mouth and nuzzling it into a defender – he is clearly not thinking, is he?

The second part of this article is for Subscribers only.