With so many Liverpool players involved, and an ex-Liverpool manager in charge (lest we forget), Mihail will be looking at England’s World Cup games.

Since the warm-up friendlies it has been clear what Roy Hodgson’s starting team for the group stage of the World Cup would be.

The main talking point before the clash was how Rooney allowed Pirlo to dictate the previous match when these two teams met at Euro 12. This meant it was clear that Rooney would not be played behind the main striker and so would be moved out on the wing. As such the dilemma ahead of the England manager was which of Sterling or Welbeck to play centrally to try to shut down Italy’s chief ball-player. He chose the Liverpool player to play off his club teammate Sturridge, with Man Utd’s versatile forward playing on the right flank.

For Italy, Prandelli had a couple of problems to solve going into the game. Buffon and his first choice left-back De Sciglio were injured, meaning Sirigu would start in goal with Chiellini forced to play on the left. This opened up space alongside Barzagli in the middle of the defence for one of Bonucci and Paletta. The latter got the nod largely due to his impressive displays during the pre-tournament friendlies.

Like Hodgson, Prandelli had a tactical dilemma to solve; the most suitable formation for his team. With England expected not to play with a proper front two, and unlikely to attempt to be dominant in terms of possession and territory, the 3-1-4-2 ruled.  This left 4-3-1-2 and 4-3-2-1 shapes as the main contenders. Whatever the precise starting formation Prandelli chose, it was clear Italy would be very narrow and boast excellent technical ability in midfield, meaning England would be both outnumbered (be it 4-v-3 or 5-v-3) and very likely easily outplayed in that zone. The former Fiorentina manager settled for the latter option – to field five midfielders behind Balotelli in what was a cross between the 4-3-2-1 and 4-1-3-1-1 shapes. 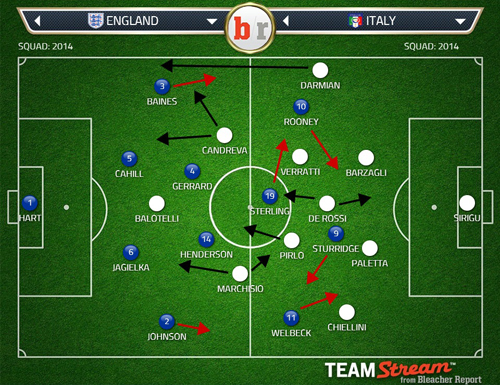 It was a game that had everything, from different formations and styles of play through tactical progression during the game to some sparkling football played by both teams during patches of the game. As such it was both an enjoyable and genuine contest between two of the world’s big footballing nations.