Tony Pulis went for his usual starting XI, lined-up in the regular 4-4-1-1 formation. Cameron Jerome was ill, so Chamakh had to spearhead the attack with Ledley pushed forward to play just off him. This meant there was space for Dikgacoi to return in midfield and play alongside Jedinak.

For Liverpool, with Sturridge fit to start, Rodgers returned to the 4-3-1-2 formation. However, with Coutinho suffering from a knock, he remained on the bench with Lucas and Allen once again comprising the midfield duo ahead of Gerrard. 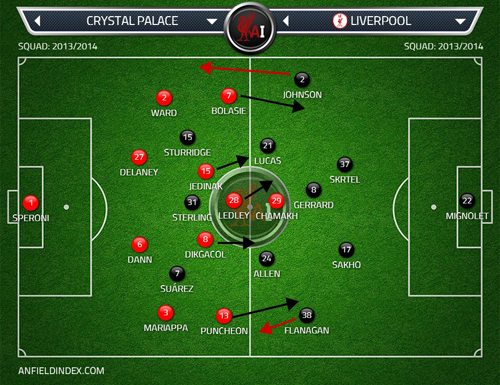 This game for Crystal Palace was all about bragging rights and doing their best to perform well, given it was their last home game of the season. For Liverpool the game was important in two main aspects. The first was in relation to the Reds’ struggles against Chelsea’s parked bus last week and whether the team would be able to show attacking improvement against a similar type of opposition. Second, it was about winning the game in order to maintain the pressure on Man City and take the title battle to the last game of the season.

While it could be said the home team largely succeeded in their quest to satisfy their fans, Liverpool failed on both fronts. Not only did the visitors struggle to show any drastic improvement in their ability to break down a packed defence, but at the end they lost their three-goal lead in a spectacular, bordering on unbelievable fashion.

The fact the hosts had nothing tangible to play for unsurprisingly resulted in Palace playing freely and without any added pressure to worry about the result. The surprising aspect though was that this freedom was transformed into such an approach to the game that it made the hosts look, categorically, unlike a Pulis side. That unusualness was evident in both how the team attacked and defended in the game.

The way the match started it was evident Palace were peculiarly attack-minded. Right from the off, the home team looked keen to commit the majority of their team forward at every attacking or counter-attacking opportunity. This meant that apart from the front four, the Eagles surprisingly had their midfield duo and at least one of their full-backs pushing forward too. It was the centre-backs and one of the full-backs who were the only players staying behind the play and providing any sort of defensive cover.