Liverpool’s starting XI saw Henderson and Agger welcomed back into the starting XI with Lucas and Sakho, respectively, benched. Coutinho was again on the bench, meaning the narrow front three stayed the same. Once again Rodgers started with the 4-3-1-2 formation.

Pardew had some problems to solve. Remy got a knock in the day before so couldn’t feature, while Ben Arfa was – perhaps surprisingly – left out of the match squad. This and Cisse continuing to suffer from a knee injury meant Newcastle were deprived of some of their most influential attackers. Combine this with visiting Anfield – where Liverpool needed a win – and it was unsurprising Pardew went with a very defensive setup. The shape was 5-4-1 with Ameobi the target-man upfront, Gouffran and Sissoko were once again selected on the flanks. 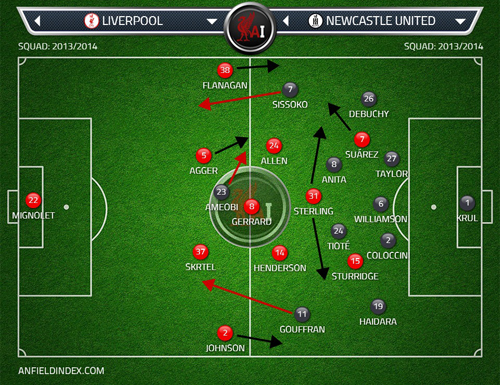 In terms of performance, this game brought little joy to Liverpool fans. The team eventually won the game, but the display was far from the anticipated free-flowing attacking vigour. The expectancy was to see the Reds seeing out the season properly, celebrating what was an unexpectedly wonderful league campaign.

However, this isn’t how the game transpired; for as much as credit has to go to Newcastle for their defensive performance in the first hour, criticism should be attributed to Liverpool’s ponderous attacking display.

Basically this game was always going to be about Liverpool attacking and Newcastle defending. So the interesting aspect in the whole tactical battle was going to be how precisely the two teams were going to execute their strategy.

Newcastle’s starting XI meant there were two probable line-up variants. The common thing in both was there would be a back three unit. Both were tactically logical and suitable once factored in the huge possibility that Liverpool were going to start with a 4-3-1-2 formation.

The first variant was to see Pardew starting with a 3-4-1-2 (morphing into 5-3-2-0 when out of possession) – that he used this season a few weeks ago at Stoke. Here, Haidara and Debuchy would have been the wing-backs, Anita and Tiote the two holding midfielders with Sissoko the advanced midfielder behind the front pair of Gouffran and Ameobi. This setup was sensible in that there would have been the 3-v-2 advantage at the back, with the two deep-lying midfielders patrolling the space between the lines. The wing-backs would have deal with Liverpool’s full-backs, while the front three would provide both enough extra positional stability – with the three of them dropping behind the ball and trying to prevent Liverpool’s midfielders having an easy time on the ball to pick out forward passes – and a certain counter-attacking threat. In attack, the front three would have been able to provide three types of threat. First, there was Ameobi’s hold-up play and ability in the air, serving as potential key outlet to receive long passes from deep and bring others into play. Second, there was Gouffran’s ability to roam the channels and provide the diverse threat on the break – the mobility to get in behind, in addition to playing 1-on-1 with Liverpool’s centre-backs. Finally, there was the danger of seeing Sissoko simply powering past Gerrard, bursting forward from deep to get involved in swift counter-attacks.

However, for whatever reason, Pardew opted against that variant and decided to use the other approach. The alternative setup was to see Newcastle starting in a simple 5-4-1 formation. This was basically the usual 4-4-2 formation but due to the non-availability of Remy, Pardew introduced a third centre-back (Steven Taylor) and switched to a 5-4-1. But as much as this seems to be a very basic change, it had some tactically really positive and suitable – when keeping in mind how it seemed Liverpool would likely start the game – repercussions for Newcastle.