How Did It Make You Feel?

How Did It Make You Feel?

One hundred and one goals.

It has, like so much of this season, a beautiful, poetic ring to it. One hundred and one times that we leapt for joy, that all of our troubles were momentarily forgotten, that we gloried in the scintillating red tide of verve and panache.

Just consider that and let it crystallise in your mind. Let it probe the recesses of your brain. Let it engulf you. Allow yourself to be overcome by the sheer breadth of our unique brand of football. Savour it and taste it for what it was; close to miraculous.

One hundred and one bloody goals.

It shouldn’t happen really, should it? Only the third team since the formation of the Premier League to achieve the feat of a century of strikes (and the only team to have done so without becoming champions – Ed). The first team that has not been bankrolled to an extraordinary extent.

Our beloved, gorgeous Reds.  For a second, forget this fact on an intellectual level and embrace it on an emotional one.

One hundred and one goals.

Every single one of them a thing of beauty, a mass, collective outpouring of sheer joy. Because, and this is symptomatic of Liverpool this season, nearly every goal was vital, or at least felt vital. 3-1 up and as the opposition’s onion bag bulged, we still celebrated with frenzied abandon and relief. We hugged strangers in a delirious ecstasy, grown men cried on more than a few occasions – sometimes in grief, sometimes in pride but always in love with this team.

In such a season, how do we pick our favourite goals? I decided to look at some of the strikes that hit the net, not from a technical or even aesthetic point of view, but from the aforementioned emotional one. Some of the goals described undoubtedly would be on a ‘best goal’ DVD but there were some that had such meaning for me, and I imagine (and hope) the majority of Liverpool fans.

So I have compiled a list of the most memorable goals of the season, in no particular order, to try and come to terms with the still kaleidoscopic maelstrom of raw emotions that have set up shop in my mind. As we swim in these Lethe like waters that is the post-season, caught between the slowly gathering storm of the transfer window and the inexorable, relentless media build-up to the World Cup, let us ask a collective question: how did it make you feel?

From a purely technical point of view, the goal that completed his hat-trick was arguably more accomplished.  But Luis’ first is one of those images of the season that cannot be denied an iconic perception. The preceding fixture played its part: being beaten by Hull City and putting on an insipid and lacklustre performance that had many fearing the worst.  Lest we forget now, it could be argued that such a lesson had been coming – our midfield had often failed to press and was simply overrun on uncomfortably frequent occasions. It was quite simply a complete wreckage of a display, and as the Christmas lights started to flicker to life, Norwich City came to Anfield. There was palpable tension that night, as if we knew that our very decent start to the season was on a knife-edge; that our Champions League hopes were already set to be dashed before the turkey took its place on the Yuletide table. Norwich started the game brightly and belied their league position as they harried our more gifted players who looked slightly subdued, maybe even nervous. Passes went astray. Suarez himself tried a few moves that failed and actually looked off the pace. I sat watching and feared the worst. Then all the foreboding, all the trepidation, all the complete nervous energy which had seemed to coalesce like a bleak cloud around and inside Anfield evaporated with a swing of Luis Suarez’s boot. Forty yards from goal. A shot? A lob? A swerving volley? It was all of these; it was a dipping tour de force of breath-taking ambition, execution and impudence.  Perhaps only Suarez, of all the players in the league would even attempt that. It was sheer perfection and as John Ruddy dived in a kind of forlorn resignation (fucking hell, HIM again!), Anfield erupted in a swirling blend of fevered, incredulous rapture and joyous relief.  It was one of those catalytic moments in the season and, not for the last time, our little Uruguayan was the epicentre for the shockwaves of hope that emanated from the pitch and washed over supporters. 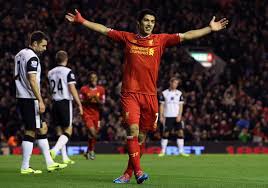 Doubtless this would list on many scousers’ favourite moments of the season; a smile-inducing memory, regardless of one’s current mood.  It was the beguiling cherry on the cake that was the dismantling of Spurs.

The rest of this article, which features goals by Daniel Sturridge, Raheem Sterling, Daniel Agger, Steve Gerrard and Luis Suarez, is for Subscribers only.