There can have been fewer more pathetic sights in football than a plane flying over a stadium with a banner from rival supporters who weren’t even involved in that match. Talk about obsessed. After about eight flypasts, the prop plane disappeared, taking with it its bizarre comparison between Manchester United’s entire history and the Liverpool’s captain’s sixteen years.

It was also fairly sad to hear Newcastle fans singing about Gerrard’s slip a few weeks back, as if they benefited from it, rather than being mid-table observers with nothing to do but bait. Fair play to the Newcastle contingent who stayed back to applaud Liverpool and Gerrard on their lap of honour (and yes, it was about honour), but the desire to mock him during the match  itself was a bit distasteful. Perhaps it’s all part of the bantz (as undertaken by cuntz), but it almost felt like none of Newcastle’s god-damned business. 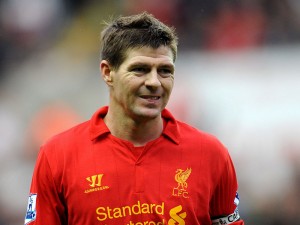 Football is largely about winning things, but there is plenty of room for other stories. For instance, Sunderland won nothing after two fine cup runs, one of which saw them as beaten finalists. Yet how good must their fans have felt this week after a remarkable run of results in the league that propelled them from doomed to safety? They’ll be talking about that for years; longer than City fans will talk about winning the League Cup (although congratulations to Pellegrini’s men for winning the league, something they will remember. Perhaps he can now give Jose Mourinho the middle finger. I, for one, would pay to see that.)

Having come so close, and with no reason to feel the chance has gone for good, Steven Gerrard may now retire within two or three years without a champions’ medal. Yet will he look jealously at Tom Cleverley or Phil Neville, or various other forgettable players? Of course not. His career may feel incomplete without the trophy we all crave most of all, but Gerrard will be remembered in fifty years’ time. Not to pick on him, but Cleverley will barely be remembered in ten.

Winning isn’t everything. Just as the journey is often better than the arrival, a football season is about what your club meant to you over 38 games, plus possible cup runs; and not what rival fans choose to sing or goad about. (And if your team just finished 7th, why on earth would you fly a banner over the stadium of a team who’d taken the title to the final day?)

Most seasons the vast majority of clubs win nothing. And plenty of the time there will be little to sing about, with boredom, mediocrity and even relegation. But Liverpool fans have had an incredible amount to sing about this season, and that includes serenading their captain. In an age when the term is horribly overused, Gerrard is a genuine legend. And it’s not like his trophy cabinet is bare, or that he hasn’t put his stamp of quality on dozens of major occasions.

Players and ex-players may use medals as a form of collateral, but no fan fondly recalls, with eyes misting, the number of medals an individual won. They remember spirit, talent, effort, genius – the sum total of their career brilliance, which often cannot be quantified, and is just an abiding sense; not the number of shiny trinkets they picked up. If we want to play that game, Djimi Traore was better than a whole host of world-class talents.

Gerrard, and Liverpool, can hold their heads high. To win 26 out of 38 games, scoring 101 goals in the process, is pretty phenomenal when you don’t have one of the costliest squads or XIs. It may prove to be hard to reproduce next season, with all the extra games, but then there’s the extra money and cachet of the Champions League to counter that. Rival clubs may be stronger, but Liverpool should be, too. Whatever happens, Liverpool won’t be favourites come August.

Perhaps it’s fair to say that being exciting and flamboyant, and winning nothing, could get old; people will then crave pragmatism. But right now it feels like a wonderfully fresh ride. The worst thing about this season is that it’s come to an end.

But just as people remember Hungary in ’54, Holland in ’74 and Brazil in ’82, people will remember Steven Gerrard. And Liverpool fans will remember this season, too. Perhaps some neutrals may also recall it fondly, but then the neutrals will turn on you, sooner or later. Bill Shankly never spoke of making the neutrals happy.

Ultimately, a team’s duty is to make its own fans happy. That’s all they need to do. And Steven Gerrard, Brendan Rodgers, Luis Suarez and Co. all did that in 2013/14.

Could it have ended better? Yes. But could the ride have been better? I very much doubt it.