21st April 2013. Liverpool sat in 7th place with 51pts, having won 13, drawn 12 and lost nine. We’d scored 61 goals and conceded 42 and were 30pts behind leaders and eventual champions Manchester Utd who had a game in hand.

No matter what happens over the next four games, the progress we have made this season is simply staggering. To produce a 50pt swing in our favour over Manchester Utd is simply astonishing. Even more impressive is that over the same period we’ve also gained a swing of 13 points on Chelsea, 23 on Man City and 22 points on Arsenal as we approach the end of April sitting two points clear of Chelsea, six above Man City (who still have a game in hand) and 10 above Arsenal. 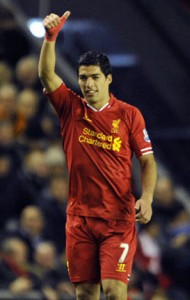 The 3-2 victory over title rivals Manchester City on Sunday was our 10th Premier League win in a row and our 13th victory from our last 15 matches in the league. Next up is a trip to Carrow Road to face Norwich City on Sunday; 12pm kick off UK time. The reverse fixture back in early December saw Luis Suarez score four times as we sealed an emphatic 5-1 victory at Anfield. Suarez also scored a hat-trick in the corresponding fixture last season with the Reds sealing a 5-2 victory at Carrow Road. Maybe Suarez has a pathological dislike of the colours yellow and green or maybe he simply doesn’t like canaries but whatever it is, in just five games against the Canaries he has scored 11 times, making him our record scorer against Norwich. To put that into context, Ian Rush has nine goals in 21 appearances against Norwich and Kenny Dalglish has seven goals in 18 appearances.

Norwich sit in 17th place – two points clear of the relegation zone – but sacked Chris Hughton following back to back defeats against Swansea City (0-3 away) and West Bromwich Albion (0-1 at home). Under Hughton’s replacement, promoted Youth Team Coach Neil Adams, Norwich suffered a 0-1 defeat to Fulham on Saturday but prior to that home defeat against West Brom had not lost at Carrow Road in six games, a sequence which included holding Manchester City to a 0-0 draw.

The Canaries have scored just 26 goals (the second lowest in the division) and have conceded 53 (the fourth highest in the league), however their tally of 13 goals conceded at home is the fourth lowest in the Premier League, only bettered by Arsenal (11), Man City (10) and Chelsea (9).