True to their footballing philosophy both managers went with a very attack-minded starting selection. Neither team surprised in terms of line-ups, as the managers opted for what was largely anticipated. As expected, Clichy was preferred to Kolarov, presumably with Pellegrini anticipating Sterling to start on the right of a 4-1-2-3 shape.

But while City continued in their recent 4-2-3-1 format, it was interesting to see Liverpool’s XI actually starting in a midfield diamond. For the first time, both Coutinho and Sterling started within that formation. Theoretically both could play as the side midfielder and at the tip of the diamond, with either variant providing a different kind of tactical feel to the side. Here, it was Coutinho as the right-shuttler and Sterling just off the forwards. 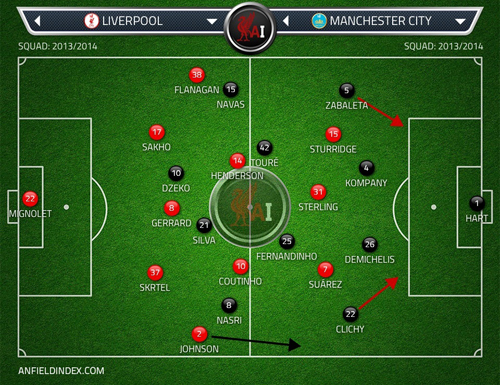 Simply said, the game had everything – a constantly shifting tactical battle, at times breath-taking football and drama from the first minute to the last. All of this of course was easily anticipated due to the sheer quality of both sides, the high number of match-winners in each team and the overall tactical intelligence reinforced by both managers’ positive mind-set. The emotional build-up to this game, the nature of the occasion and the respect with which both set of fans, players and managers acted towards each other just added to the overall quality and experience throughout the game.

The only ‘negative’ was that this clash wasn’t the season finale, the de-facto title-decider ‘the winner takes all’ type of game. This would have been the ultimate credit to its quality.

Based on the starting line-ups, it was quite visible that both teams looked to dominate and play a proactive brand of football. From the 20 outfield players, there were arguably no more than five (the four centre-backs and Flanagan) purely defensive-minded players on the pitch; players with the primary concern to defend and not attack or play-make. This promised to be quite an open and technical contest.

The only difference was in the type of players selected to play within both team’s formations. Man City’s players, except Navas and perhaps Fernandinho, are the type who prefer patient and gradual clever movement and passing patterns, with the aim of retaining the ball for as long as possible and as near to the opponent’s penalty area as possible. This is further heightened by Pellegrini’s principle preference for a methodical and calm build-up.

In contrast, Liverpool’s team were full of ‘direct’ players with the overall feel of ‘directness’ being magnified by the players’ exact positioning within the selected formation. The midfield quartet had a formerly false 10 type of player (Gerrard), a pure and highly energetic box-to-box midfielder (Henderson), a through-balls based #10 (Coutinho) and a natural winger (Sterling). In their nature, although technically capable of retaining the ball, each of these four players has a direct ‘attack first, pass second’ type of mind-set. Johnson, unlike Zabaleta and Clichy, is also about looking for ways to quickly bomb forward and get ahead of the play instead of biding his time, helping with the early build-up play and overlapping down the flank late on.  Add to this the front two who are all about quick movement and sudden penetration, and the feeling you get is for a Liverpool side set up to literally blitz through the opposition right from the start.