Pochettino went for his usual starting XI and 4-1-2-3 formation. Lovren was back in the team, replacing Yoshida, with the Saints now having their first choice centre-back pairing. Interestingly Lallana and Rodgriguez were swapped – the former was on the left with the latter on the right within the front three unit, whereas usually it’s the other way around.

For Liverpool, Rodgers dropped Sterling and played Allen, making the surprising decision to line up with a different formation. Based on the starting personnel it could have easily been the usual 4-1-2-3 with Coutinho tucked narrow on the left. Instead Rodgers opted to go further, trying to solidify the centre of the pitch – and preventing his team being as easily outplayed as they were the last two games against Southampton –  and used a 4-3-1-2 (or 4-4-2 diamond) shape. 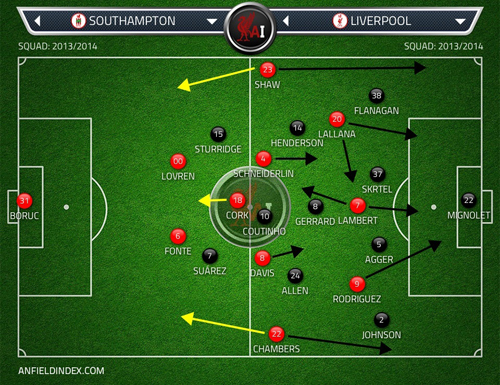 With both teams playing in different formations and with different strategies, this game produced a truly fascinating tactical contest.

After seeing his team be completely outclassed in the previous meetings with the Saints, it was only natural to see Rodgers being willing to approach the game in a more cautious and reactive manner. However, the peculiar thing was that instead of trying to solidify all the areas where Southampton were expected to try and put pressure right from the start, Rodgers chose a variant which strengthened his team through the middle, but left it wide open down the flanks.

Obviously, the 4-3-1-2 formation was designed to offer the extra midfield body to gain a 4-v-3 numerical advantage in that zone and help bypass Saints’ heavy press. In addition, fielding Suarez and Sturridge as a genuine front pair aimed to leave them 2-v-2 with the centre-backs, especially at the break. All of this seemed fine and tactically suitable, but with one crucial condition – that Liverpool would be the team dominating, keeping hold of the ball by using their midfield advantage, and as a result pinning back the opposition and spreading patiently and gradually in attack. However, with the visitors evidently looking to play reactive football, it gave the initiative to the opponent, which minimised the potential positive impact of their strong areas (midfield advantage and 2-v-2 in attack) and magnified the negative effect of their weak areas (down the flanks, and as a result between the lines).

In a context where Liverpool would look to defend mainly in a 4-3-1-2 and let Southampton dominate them with their 4-1-2-3 formation, it meant the visitors would hope to catch the opposition on the break and do their best to withstand their attacks. In such a scenario, Liverpool’s side midfielders could’ve been used in two different roles. In the first variant they were going to stay centrally, aiming to create a tight midfield unit and prevent Gerrard being overloaded, and also the back four – and especially the centre-backs – being badly exposed. Here the obvious downside was that Southampton’s full-backs would have been completely unmarked and left free to bomb forward and be a constant threat. In the alternative variant, Allen and Henderson were going to be given the brief to drift wide and engage Chambers and Shaw and minimise their attacking influence. The downside here is that Gerrard would have been surely overloaded with Southampton’s midfield duo and front three having the space through the middle to torment Liverpool’s back four time after time.

The fact that in both variants Liverpool would have a massive weakness was perhaps the reason we saw Allen and Henderson trying to execute a mixture of their two potential distinct roles. Presumably, the aim was to count on their energy and mobility to try and do both jobs, not leaving Liverpool weak either down the sides nor through the middle.

Tactics for Beginners – No.15.