Rodgers kept the same XI and formation from the previous two games. The only changes were in the positioning of the midfield and front players (more on this below).

For Arsenal, Wenger recalled Wilshere from injury to partner Arteta. This meant a place for Oxlade-Chamberlain on the right flank with Cazorla on the left. Rosicky and Podolski – two potential starters, if Wilshere wasn’t fit to feature, remained on the bench. 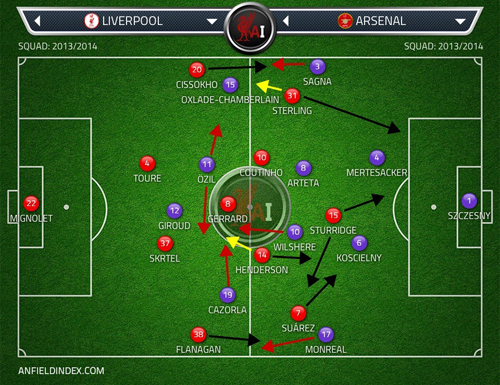 The nature of the starting XIs meant the potential tactical context was easily anticipated, as there were clear areas of strengths and weakness for both sides. All of this was based on the proviso that – as expected – both teams would continue with their recent formations and usual players’ positioning. For Liverpool this meant the 4-1-2-3 seen against Everton and WBA, while for Arsenal it meant the lopsided 4-2-3-1 with Cazorla tucked in on the left flank.

Potentially we would see Arsenal having two major areas of strengths, both because of their ability to cause positional overloads. The first one was through the middle – with Cazorla coming infield the Gunners could have easily enjoyed a 4-v-3 advantage in that zone. The second was down Liverpool’s left flank where Cissokho might have been an easy target for a 2-v-1 overloading caused by Sagna keenly joining Oxlade-Chamberlain down that flank with Suarez/Sturridge (due to their constant roaming and swapping) unable to offer the full-back any defensive assistance.

Arsenal’s potential supremacy on their right flank could easily have been nullified if Sterling was placed there with one of Suarez or Sturridge playing on the right. Depending on where Rodgers preferred to have Sturridge’s pace and how specifically he planned to penetrate Arsenal, the home team had the following two prime variants. Using Suarez through the middle would have meant Sturridge is left to dart infield off the right, which would have posed a massive dilemma for Koscielny. If he was to drift wide to cover Sturridge, Suarez was going to be left 1-v-1 against Mertesacker with Sterling further capable to cut infield through the inside-left channel. If Koscielny was to stay central and stick tight on Suarez – to allow Mertesacker to execute his usual covering role in behind – Sturridge would have been free to penetrate coming diagonally off the right flank. There was also the possibility to see Suarez drifting to the right, attempting to combine with Sturridge, which for sure would have forced Koscielny to follow him – something that would have left Mertesacker to deal with the in-cutting runs of Sterling on his own. The alternative scenario – Suarez down the right and Sturridge through the middle – would have posed equally tough questions on Arsenal’s defence, but in a different manner. Sturridge’s pace could have been used in the same way as against Everton – him working the channels and latching onto angled or lofted through balls from behind. Meanwhile Suarez and Sterling’s narrow runs would have exploited every free inch down the inside channels.

However, the problem with Arsenal’s potential supremacy through the middle was going to be much harder to deal with, given Liverpool’s XI. No matter the potential specific marking patterns to be applied by the Reds, there was always the chance to see one of Arsenal’s midfield completely free, on top of the risk counting on Gerrard and Coutinho to do very specific defensive jobs against such a highly technical and quality opposition. On paper, it would have been a case of Gerrard being asked to sit extremely deep and plug the space between the lines for Ozil to thread his through balls. In addition, Henderson used to track back Wilshere’s surges from midfield and Coutinho trying his best to minimise Arteta’s passing influence. But even if Liverpool’s midfielders were to be successful in these jobs, there was the case of seeing Cazorla coming infield unmarked, and to do similar damage as Nasri in the Man City game back in December. As touched on in the preview, the way to – at the very least partially manage this – was to either ask Flanagan to stick tight on him, following him all across between the lines, or use Toure to step up and mark the Spaniard with Flanagan told to tuck in and cover for Toure in behind.

Apart from the above potential problems, there was also the potential dilemma for Liverpool about how to proceed on a more general strategic level. Seeing Liverpool trying to be passive (defending deep and applying no pressure on the ball), focusing on using the above discussed individual marking patterns as a way to counter Arsenal’s ability to cause positional overloads, might have meant too much space and time for the visitors to enjoy on the ball. This would have surely led to the Gunners controlling the game, dictating the tempo and counting on their supreme ball-playing skills, coupled with their positional overloads, to patiently work the ball around and wait for the openings. The alternative scenario was to see Liverpool gambling on being proactive without the ball (applying fierce pressing as soon as the ball was lost) and attack-minded in possession (simply trying to overrun the opposition by committing high numbers of players in attack in an all-guns blazing type of approach). Logically, here the massive risk was that effectively Liverpool would have been gambling on not being picked off on the break by the opposition, counting on their fierce press to not give enough time on the ball, being more efficient than Arsenal’s ball-playing skills to bypass that pressing.

Evidently, on a hypothetical level, no matter the exact approach, Liverpool would have been gambling big time with Arsenal’s system having the capability to come on top in any scenario. It seemed Liverpool’s best bet is to approach the game with enough vigour and drive to try their best and deny Arsenal time on the ball in an attempt to minimise the potential impact from their ability to create positional overloads and back them up with the required high quality ball-playing skills. This, coupled with the hope that one of the attacks would lead to an early goal, which the home team would then use as enough reason to sit back and defend resolutely, hoping to catch the  visitors on the break for the decisive second goal.

But the way the game panned out had nothing to do with the pre-game expectations based on the expected tactical battle. As such, this game was the perfect case study in how, sometimes in football, not everything goes according to how you planned or expected it to happen. Here, tactics and strategy went out of the window quite quickly, giving way to other things like the shift in momentum caused by one of the teams receiving an enormous psychological lift, while the other was decisively hammered down.