After the good showing at Old Trafford, Meulensteen rather logically kept the same starting formation and personnel for this game. The only change was in attack, where Bent replaced Tankovic as the spearhead striker.

Rodgers unsurprisingly continued with the exact same starting XI as in the past three games. The only change was again in how switched the positions of his midfielders and attackers. Sterling was put back to the right flank with Suarez now on the left. Following this, Coutinho was again played in his right of centre position with Henderson on the side of Suarez. 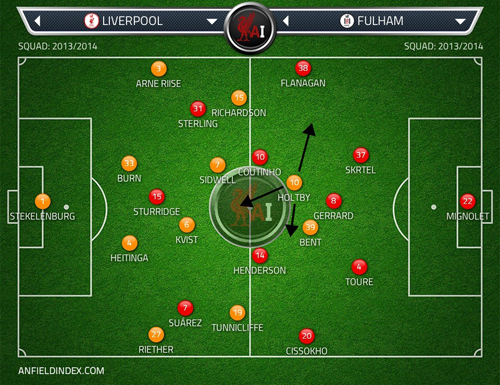 Fulham had their good moments in the game, but this game was all about Liverpool’s strength of character, their will to keep going in search of the win and the tactical flexibility and general abilities shown by the players and their manager. The team’s performance may have lacked some of the glamour of Liverpool’s recent wins, but arguably, it was one the greatest adverts of Rodgers’ tactical acumen.