With a shade over half of the season now behind us, I thought it was time to write an update on the TTT Predicts competition.

The first thing to note is just how well the group as a whole have predicted how the campaign has panned out thus far.

Victory against Hull at Anfield took Liverpool to thirty-nine points after twenty games (a total which, as an aside, the Reds have only bettered twice in the previous twenty-one seasons of the Premier League). Using the most chosen result by the competition’s 137 entrants led to a group prediction of thirty-eight points. Not bad eh?

As much as the group forecasted thirty-eight points overall, the most common selection was actually thirty-six. The below chart shows how many people had each points total across the range of the selections, and broadly displays a normal distribution. 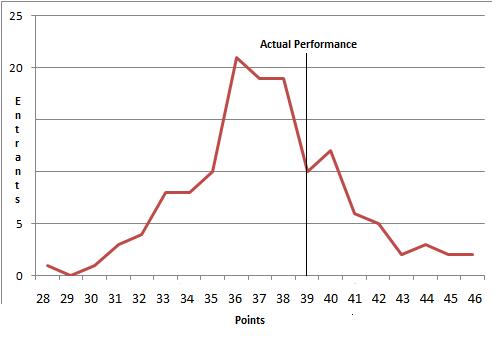 Ninety four people thought the Reds would have fewer points than in reality, with only thirty-two predicting more, which suggests on the whole that Tomkins Times subscribers should be satisfied with Liverpool’s performance so far.

On a single match basis, TTT has correctly forecast the result of fifteen of the twenty matches so far. Here are the five that were wrong, and I’m sure you can guess a few of them without looking.

I wrote in the original article at the start of the competition that Spurs had assumed some kind of bogeyman status in the minds of Kopites, which their record perhaps couldn’t match. I was pleased to be proved right there, even if 5-0 was beyond my wildest dreams!

At the opposite end of the spectrum, matches with Southampton and Hull were unexpected defeats (though fully deserved on the day), and it’s perhaps not surprising that the Sunderland match was called incorrectly when it saw the joint-lowest percentage difference between the most and second most common predictions.

With fifteen of twenty correct, I thought it would be interesting to see if the group could have turned a profit at the bookmakers. Using odds from Bet365 (which I chose at random), and a modest theoretical £5.00 stake per match, here is how it has panned out so far. 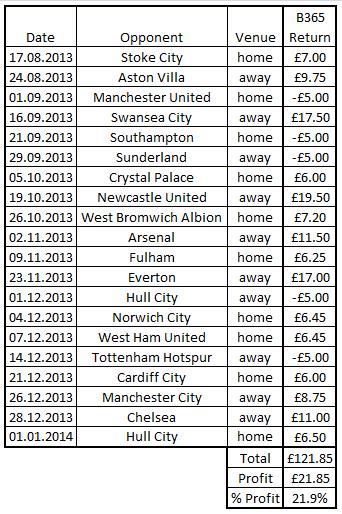 A 21.9% profit; a better return than any bank would give you! As a very infrequent and casual gambler, I found it interesting to see just how much you can win by correctly forecasting a draw.