Mark Hughes opted for the expected starting XI. Sorensen was only fit for the bench, so Butland made his first start in goal. Arnautovic replaced the ineligible Assaidi down the left flank – the rest of the team was as per usual.

With Agger and Sakho injured, Toure needed to start alongside Skrtel. Aspas made way for the now fully fit Gerrard to start. As such Rodgers’ XI was also familiar, but there were two notable surprises. The first one was that Toure played as the left centre-back, while Gerrard and Lucas swapped their places with the former now the deepest midfielder, the latter higher up alongside Henderson. 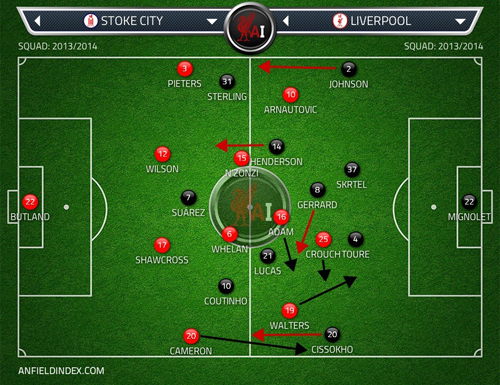 With eight goals, four in each half, the game was obviously a great spectacle. But from a technical point of view, bar a few well-developed attacks, on the whole it lacked quality. The weather didn’t help on that front, but equally, neither team was at their best using the ball when going forward. Tactically speaking, though, there were some aspects in both teams’ play that made the clash interesting, if not truly enjoyable.

The first half was the period when the game was at its technical low. There was little passing quality from both teams, but especially from Stoke. Going forward, the teams lacked improvisation and the players seemed rather static in how they tried to move off the ball.

There were plenty of stoppages in play, due to various fouls and set-plays. All of this disturbed the flow of the game. In open play the teams had different aims, which made the game interesting due to the contrasting tactical approaches. But ultimately they both failed to exert any sort of control over the game or change the context to such an extent to suit their approach and needs.

Stoke were inclined to hit the ball forward quickly, attacking in numbers. They benefited from the many stoppages and set-piece situations as they were able to send players in and around Liverpool’s penalty area. In addition, the game often being stop-start helped halt Liverpool’s passing rhythm and prevent them settling into a decent flow. However, in open play Stoke failed to press Liverpool efficiently, meaning the visitors eventually managed to keep the ball long enough to prevent themselves being subject to a non-stop bombardment from the home team.

Meanwhile, Liverpool were obviously looking to control the ball with the aim of cooling the tempo and dictating the play. Although they finished the half with a 63% possession advantage and 80 more attempted passes, there wasn’t a period where Liverpool established control via their passing dominance. Similar to the overall theme of the stop-start game flow, in the moments Liverpool looked like gaining such control, Stoke managed to hit back and have minutes of pressure, pinning Liverpool back. Then the cycle would repeat and neither team would succeed in making the game as they presumably ideally wanted. 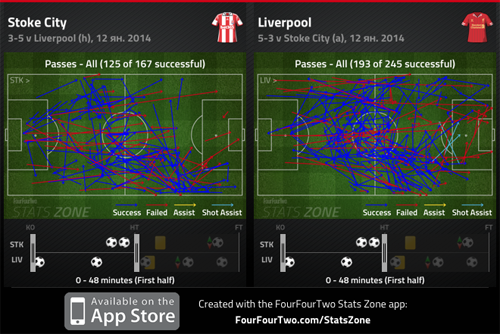 Suarez's 1st At Stoke - Goal of the Season?