The 190th league meeting between 4th placed Liverpool and 6th placed Everton on Tuesday (Anfield; 8pm kick off UK time) should be a fascinating encounter with both clubs harbouring very real ambitions of finishing in the top four come the end of the season. Liverpool recovered from a terrible first half against Aston Villa at Anfield to salvage a 2-2 draw, while Everton failed to capitalise on our slip and were held to a 1-1 draw with West Brom at the Hawthorns last Monday evening.

No team has lost fewer league games than Everton this season with only Manchester City (1-3 at COMS) and Sunderland (0-1 at Goodison) managing to inflict defeats on Roberto Martinez’s side. Their total of nine draws – three at home, six away – is the second highest in the league behind West Brom (10), while they have the second best defensive record with 20 goals conceded in 22 matches. 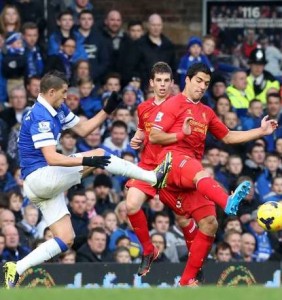 The corresponding fixture last season ended in a 0-0 draw (the last three league fixtures between these two sides home and away have all ended in draws and four of the last seven meetings at Anfield in the Premier League have ended in a stalemate) taking Everton’s win-less sequence at L4 to 13 (seven draws and six defeats for the Toffees). The two sides shared the spoils earlier in the season at Goodison with the match finishing 3-3. Coutinho put us ahead after 5′ before Mirallas levelled matters three minutes later, only for Luis Suarez to restore our lead on 19′. Two goals in ten second half minutes from Lukaku put the Toffees 3-2 up with eight minutes remaining, but with time running out Daniel Sturridge found the back of the net in the 89th minute to ensure we left Goodison with a point.

Transfer Records, and Why They Mata