The Reds continued their 100% start to 2014 with a remarkable 5-3 victory over Stoke City last Sunday, and Brendan Rodgers will be hoping to make it four wins from four when we host Paul Lambert’s Aston Villa on Saturday; 5.30pm kick off UK time. We’re yet to record a win against a team managed by Paul Lambert at Anfield from two previous attempts – we drew 1-1 with his Norwich City side back in October 2011 and suffered a 1-3 defeat to his Aston Villa team in December 2012 – but we did leave Villa Park with all three points back in August thanks to a Daniel Sturridge strike.

Villa are currently in 11th place  – five points above the drop zone – with an especially poor record at Villa Park being their biggest downfall, they’ve won there just twice all season. Away from home is a different story however, as the Villains have won four (3-1 at Arsenal, 1-0 at Norwich, 3-2 at Southampton and 1-0 at Sunderland), drawn three (0-0 with Hull, 0-0 with West Ham and 2-2 with West Brom) and lost three (1-2 to Chelsea, 0-2 to Fulham and 1-2 to Stoke). Their tally of 12 goals scored is the joint eighth highest in the division, while only Everton (with 10) have conceded fewer goals than Aston Villa (11) on their travels prior to this fixture. 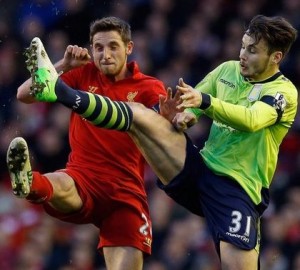 As briefly mentioned above, the corresponding fixture last season saw the Villains live up to their name and  leave Anfield with all three points, following goals from Benteke (2) and Weimann which had put Villa 3-0 up after 50 minutes, before Steven Gerrarrd scored an 87th minute consolation. Our recent form in this fixture is poor having won two of the last six league meetings at Anfield (suffering two defeats and two draws) but our overall record against Villa at Anfield is far more impressive with 54 wins from 88 meetings with just the 16 defeats.

The Reds have been impressive at Anfield this season winning nine of the ten league games played (only Man City with 30pts and Chelsea with 28pts can boast a better points tally at home), only Man City (38) have scored more goals at home than our total of 27, while the six goals conceded is the joint lowest in the division shared with Man City and Arsenal.

Our biggest league victory in this fixture is 6-1 recorded on October 1953, while Aston Villa’s biggest victory against us at Anfield is 6-3 which came 1914/15 season.

Which Two Signings Would You Make This Jan?