Liverpool’s previously threadbare squad took another hit for this game as Sakho and Allen were injured and couldn’t feature. Cissokho and Aspas made the starting XI, with Gerrard only deemed fit enough for the bench.

Since we played them at the KC stadium, Hull have played their subsequent games exclusively with a 3-1-4-2 formation. The only exception was the Fulham game where they used a 4-4-1-1. As such, it was logical to see Bruce’s main dilemma being whether to continue with the 3-1-4-2 shape, or revert back to the 3-5-1-1 that worked so well the last time against Liverpool. Presumably Hull’s success in stifling Liverpool that day had more weight as the team started with the 3-5-1-1 variant. 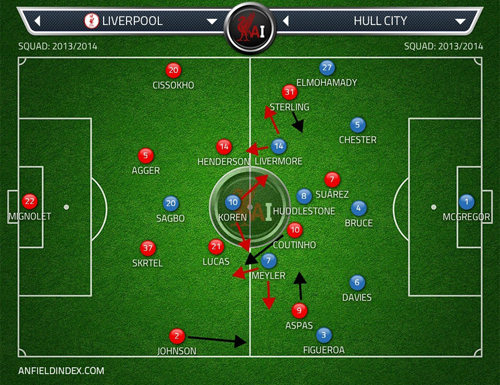 As a whole the match was of a low quality and almost non-existent tactical battle in the true sense of the phrase. However, this shouldn’t have been a surprise given the tiredness that both teams had accumulated over the past week or so. This was compounded by the lack of available options to rotate and freshen things up, mainly due to the depleted pool of players that remained for Rodgers to choose from.

Anyway, the game had its share of fine moments, mainly thanks to Liverpool’s attacking flair and ability to create neat passing combinations. The main interest came from how Liverpool approached the game strategically, how that strategy was executed tactically, and the in-game tweaks Rodgers introduced. But, with Hull also playing their part in the grand scheme of the things, the game was not simply all about Liverpool.

The first key question in relation to Liverpool’s performance was always going to be how they would approach the game strategically. Would they start slowly, work the ball patiently, move forward gradually, and wait for opportunities to open up, rather than always trying to force the issue? This would make sense if the main aim was to avoid becoming physically burned out early on and then lack the energy to maintain the pressure in the second half if the score was still unacceptable. Alternatively, would they pile the pressure on Hull right from the start, playing at a quick tempo with clear and direct attacking intentions? Here the possible aim would be to secure the desired comfortable lead early on, and then simply sit back and protect it by retaining the ball reactively while they saw the game out.

Liverpool’s starting XI suggested both variants were equally feasible. If the team was going to start with some form of a very fluid 4-4-2 (resembling a 4-2-2-2), the more direct and attack-minded approach would to be easily achieved. Aspas and Suarez would be the roaming forwards, working Hull’s back three, with the attacking width provided by the two overlapping full-backs. Then with Coutinho moving infield from the left and Sterling looking to either stretch the play or attempt diagonal runs, the team would have been in position to provide the required diversity too. The Brazilian would have helped the midfield duo work the ball through the middle and convert the possession into meaningful passing combinations higher up the pitch. Meanwhile Sterling would vary his attacking approach and either work with Johnson down the flank or become the third main penetrating runner when moving near the penalty area.

If, however, the team was to start with a more patient and possession-based (rather than the penetration-oriented) option, the 4-2-1-3 formation was certainly the more suitable choice. This is because of the natural passing fluency provided by having Coutinho through the middle and the increased positional fluidity delivered by the front three all being different types of attacking players. This would mean the team could offer much more subtle and sophisticated attacking patterns with the aim being to help eventually turn the tons of slow possession into goal-scoring situations.

The quicker and more attacking opening might have led to Hull being overrun and the vital early goal or two being scored. But there was the risk they would expend their already depleted energy levels early on, and then potentially be vulnerable later in the game, if they were unable to keep the ball, and Hull were to mount any attacking pressure in the second half. Conversely, the slower approach would have avoided the early burn out, with the team able to allocate their physical resources evenly throughout the match. The risk here was going to be whether Hull would find this easier to defend against and use their framework to simply repel Liverpool’s ponderous and low intensity attacking moves. As it was, Rodgers opted for the slow and patient approach. Arguably both variants had their potential benefits and drawbacks.

Presumably Rodgers counted on his team’s passing abilities to establish the required platform to achieve total possession and territorial dominance. From there, it seemed, he was confident that his players’ ball-playing skills and the chosen framework would be enough to work the ball around and wait for those few moments that should inevitably come for his team to create good goal-scoring chances and so eventually take the lead. If they were successful, his team would just continue to passively keep the ball and focus on seeing the game out in the second half. If not, by not expending so much energy early on would mean they would be able to re-group at half-time and start putting Hull under intense and overwhelming attacking pressure, potentially with the additional help of some tactical tweaks.