Liverpool made three changes from the Hull game, but two of them were enforced. Toure had some complaints following the Hull match, so Rodgers logically replaced him for this game. Meanwhile Coutinho was fit again, so he started. It was a direct contest between Moses and Sterling for the remaining place and given Moses’ poor showing last time out, it made sense to see Sterling retained. The only real surprise was that Allen came in for Lucas; perhaps to add greater attacking impetus and that increased technical midfield control (as Rodgers put it).

For Norwich, Hughton selected the expected 4-1-4-1 formation with largely the anticipated XI. Elmander got the nod over Hooper for the lone striker role, while Turner was benched as Bennett partnered Bassong at the back. The only real surprising decision was to see Fer giving the role of the sole anchor in midfield, with Bradley Johnson pushed up alongside Howson. 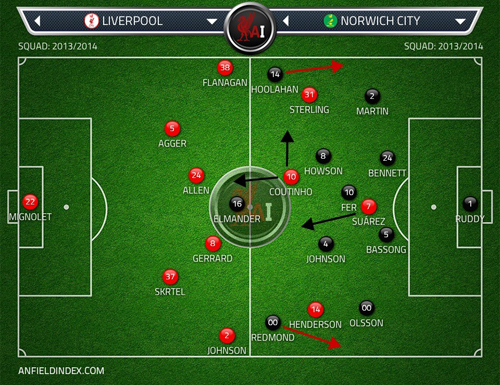 Those not watching the game could be forgiven for assuming Liverpool completely trashed the opposition. Based on the result it could also be easily deduced that Norwich were dreadful in defence and were properly battered throughout the game. But the reality couldn’t be further away from such statements. Not only did Liverpool perform, by all accounts, poorly in attack – they needed two wonder goals and another three following set-piece situations to accumulate so many goals – but Norwich performed well defensively and even offensively.