Rodgers has a habit of keeping the Liverpool side unchanged after a good result; here it was the same, with only Agger replaced by Sakho due to illness.

Allardyce made a few changes, changing his full-backs and lone striker. Furthermore, Morrison, who was suspended, made way for Jarvis, with Nolan playing deeper in midfield as West Ham went for the 4-1-2-3 formation. 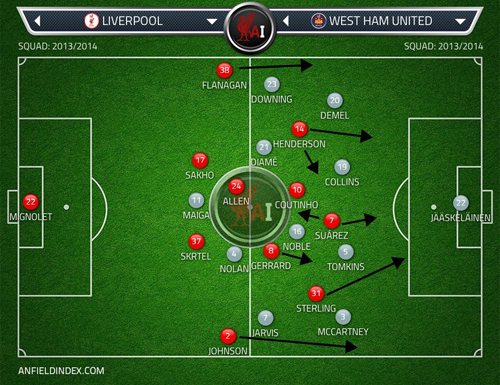 The teams’ XIs after the positional switch made by Rodgers in 15′.

Liverpool created a record number of chances in this game and could have easily doubled the score line; and this, even if we discount the two own goals and the set-piece goal, which was at least 50% own goal. But it was surprising how open West Ham looked, especially in midfield. The home team found it shockingly easy to cut through the visitors’ defensive lines.  As such it wasn’t a typical Allardyce performance from the away team.

Without the ball the Hammers were so open and proactive that one could be forgiven to think Allardyce wasn’t in charge for this game.

To start with, the team surprisingly used a high defensive line, with the players generally being closer to the halfway line than to the edge of the box. There is nothing wrong in using such an aggressive line against Liverpool, especially when there is no Sturridge on the pitch. With Suarez’s tendencies to constantly drop towards the play and seek to be involved in the build-up play, it’s to be expected that Liverpool would be striker-less, at least half of the time. So it makes sense if you push up and try to squeeze the play towards the midfield area, effectively minimising the space between the lines for him – and Coutinho for that matter – to be as influential in that respect. For this approach, however, to be successful, you need to ensure your midfielders drop deep and stay in position to congest the midfield zone in order to minimise the space there. But this is precisely what West Ham failed to do, being repeatedly caught out of position and leaving literally acres of space for Coutinho and Suarez to enjoy.