Unsurprisingly Rodgers kept the same XI, continuing with what was a cross between a lopsided 4-1-2-3 and a very asymmetrical 4-2-3-1.

On the other side Mackay reverted back to what was closer to 4-4-2 than 4-4-1-1, given how Mutch was supporting Odemwingie high up the pitch rather than the midfield duo. The only change from the WBA game saw Gunnarsson (replacing Campbell) selected to partner Medel in midfield. Whittingham and Noone kept their places down the flanks. 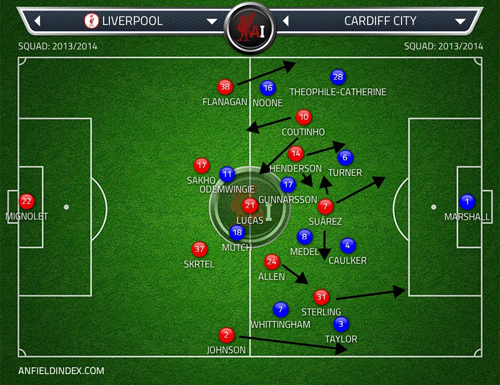 The main question before the game was, given the off-pitch turmoil the club is currently in, how well (if at all) Cardiff would apply themselves in this match. As it turned out the Bluebirds were really up for the clash, showing enough desire and making an effort to perform right from the start. Therefore it was somewhat ironic to see them handicapped by a rather poor tactical approach from their manager which initially left them too vulnerable against a team of Liverpool’s calibre.

As soon as the game started there were two peculiar things that immediately caught the eye. The first was in relation to the exact role Mutch was obviously asked to perform. Before the game it was expected that Mackay would revert to a more solid 1-2 midfield trio for this game, going back to the 4-1-2-3 formation. Instead he opted to go with the 2-1 alternative. The problem wasn’t the structure per se – a 2-1 triangle is capable of being defensively solid too, if the double pivot is sitting deep and the ‘1’ is conscientiously supporting them by patrolling the zone just ahead. But here Mutch was acting as a second forward, staying closer to the forward rather than dropping deeper to be a proper third midfielder.

It was widely expected that Rodgers would keep the same XI and shape as used in the Spurs game. So presumably Mackay’s idea was to use Mutch to stick tight on Lucas and minimise his influence on Liverpool’s passing flow. However, with Lucas often dropping between the centre-backs, Mutch needed to go very high up the pitch in order to follow the Brazilian to have any chance of preventing him from receiving the ball. However, Liverpool’s recycling trio had a numerical advantage over Cardiff’s pressing duo, so the home team found it easy to pass the ball out of defence.

The problem for Cardiff increased once Liverpool fed the ball into the midfield zone. Not only was Mutch failing to fulfil his apparent aim while being easily bypassed, but by remaining higher up it resulted in Medel and Gunnarsson facing the same overloading effect in midfield. Liverpool had the 3-v-2 advantage here too, so were able to quickly and purposefully move the ball around.

The second thing was in relation to Mackay’s decision to employ a high defensive line. This is something that goes against his usual approach, so it was particularly interesting thing to see. There can surely be no doubt that he must have watched how easily Liverpool trashed Spurs thanks mainly to the stupidity of using a high defensive line while not using the required pressure on the ball in midfield. So, to see Cardiff, more or less, using the same defensive strategy is at the very least questionable. Given their exact structure and the high defensive line, the visitors should have ensured their midfield quartet were backing the individual efforts of Mutch and Odemwingie from high up the pitch and so offer a much more cohesive pressing strategy. Instead, Cardiff’s front duo sporadically tried to close down Liverpool’s recycling trio, but the midfield continued to sit back and the back four kept a high line.

These ingredients were a clear recipe for potential disaster. Not only did Liverpool enjoy a 3-v-2 advantage both at the back and in midfield (so finding it extremely easy to construct their passing patterns), but given Cardiff’s high line the home team had space to exploit via their forward passes. All this made Cardiff extremely vulnerable to quick attacks with direct passes either in behind their defence, or searching Liverpool’s pacey players on the right flank (especially with Whittingham not having the pace to track back Johnson and also sitting narrower on the left flank as usual). It came as no surprise that Liverpool wasted no time creating potent attacks using these routes. In the first minute, Johnson sent Sterling down the right flank for him to send a dangerous cross into the box. In the sixth minute, Henderson’s diagonal ball sent Sterling in behind the defence for him to then lay the ball off for a Suarez shot that Cardiff were fortunate to block.