Liverpool Football Club has possessed some quite wonderful strike partnerships over the years – more than its fair share, some might argue – but I can’t help thinking that the current combination has the potential  (and that’s a key word) to be the Reds’ best ever. Individually they are superb, together they are sublime.

Previous combinations were certainly more easily defined: the creator and the poacher; the thinker and the speedster; the big ‘un and little ‘un. With this pair there’s a versatility and improvisation that means the two can wander anywhere in the attacking half to create space and chances; indeed, both have played as wingers and wide forwards in their careers. If nothing else, they are the hardest duo to contain.

Aged 24 and 26, this is not a case of the wise master and the young apprentice; neither are yet at the age considered a footballer’s peak (usually 27-30), although it’s fair to say that quicksilver strikers are often past their best at 25.

Of the pair, only Sturridge fits that playing style, but even then, he is so much more than a speedster who can score goals; and rather than be washed up at 23, that was the age when he really got going.

At the moment Sturridge is scoring as regularly as prime-years Ian Rush, with the added bonus of some of the skills of John Barnes. Sturridge’s incredible chipped goal against West Brom was not inch but millimetre-perfect, and although it wasn’t his best game in a red shirt, he produced several attempts full of disguise, often due to a lack of backlift, including a rasping effort that hit the bar. He has some of the quickest feet I’ve seen, and can leave defenders for dead with skill as well as pace, and is improving as a goalscorer. The only thing you’d say he lacked was aggression – at least when compared with some other strikers – but he’s potent with the ball, that’s for sure.

Suarez, meanwhile, has much of Kenny Dalglish’s guile and gnarly body strength, but with a bit more bustling mobility; as if Dalglish’s brain (albeit with a few added gremlins and glitches) was planted into Ronny Rosenthal’s body (with Ken Dodd’s teeth thrown in). The nutmeg for the opening goal of his hat-trick was a thing of great beauty – not passed through the defender’s lets, but tickled through, like some kind of magic trick.

Since his return, four league games ago, he has scored six goals, and his strike partner has four, with eight for Sturridge in the nine league games he’s started. I admit to thinking that Suarez had played his last game for the Reds, and also wondered quite publicly if the side was better balanced without him; but he’s the kind who would give 100% in a car-park kickabout, and the new formation, while not totally ideal, is helping the front two to fill their boots. 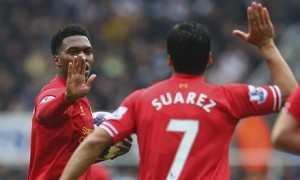 High fives all round.

It’s hard to judge goalscoring records across eras, as clearly there are distinct periods in the game when, perhaps due to rule changes and tactical machinations, there are gluts and famines. In the mid-‘80s, Ian Rush, Gary Lineker and Clive Allen all approached 50 goals in a season in English football. Currently, Lionel Messi and Cristiano Ronaldo have turned the old “averaging a goal every other game” rule about top strikers on its head by averaging a goal every game, with 60 or 70 in a campaign. At other times in football history, 20 in a season has seemed a big deal.

One thing usually considered necessary for greatness is longevity, although there are plenty of exceptions to this rule. For example, Fernando Torres spent less time at Liverpool than Emile Heskey; sometimes it’s better to burn with fierce brightness and fade away than it is to be a red giant resembling a white dwarf. The way Torres left, and the fact that he joined Chelsea of all clubs, may have soured memories, but boy did he get the Kop bouncing in his three full seasons. Robbie Fowler’s brilliance was over a similar number of years – ’94 to ’97 – with his later time at the club much less remarkable in individual terms (although how vital was he in the treble of 2001?).

It’s still very early days for Sturridge and Suarez; too early to label them as Anfield greats, but that is not to say that they haven’t been great so far. What more can they have done in their Liverpool careers? (Although in the case of the Uruguayan, avoiding lengthy bans is an obvious area for improvement. Less is more when it comes to suspensions.)

Go back to 1996, in a team also containing three centre-backs with wing-backs pushing on, and Robbie Fowler and Stan Collymore looked an absolutely unstoppable combination; but by the summer of 1997 Collymore was gone and Fowler first fell foul of the injuries that allowed Michael Owen to quickly usurp him in the pecking order.

Though brilliant together in domestic football, Fowler and Collymore never really shone on the international stage, in contrast to the way Dalglish and Rush collected a warehouse-full of caps (albeit not for elite footballing nations, although that was not their fault). Suarez is a striker of international repute, but Sturridge is not there yet. However, he’s certainly on an upward trajectory. You sense that this is no Marcus Stewart or Kevin Phillips, having a year or two in the the spotlight, but a thoroughbred.

The current pair also can’t say that they’ve proven themselves for Liverpool in title races and European adventures, in contrast with the way that Hunt and St John, Toshack and Keegan, Rush and Dalglish, Beardsley and Aldridge, and Torres and Gerrard all excelled in one or other, or both, of those areas. But it’s also fair to say that many of those greats arrived when the team was already the best around. Put Suarez and Sturridge into any Liverpool side of the past and, in theory, they wouldn’t weaken it.

It’s easy to sense that Sturridge will stick around, having finally found a spiritual home, and that Suarez will leave as soon as he gets the chance. Still, on current form Arsenal would have to offer £80,000,002, just to receive an offhand rejection.

Credit to Brendan Rodgers for bringing the best out of the pair. At the time, and for a few months after, I was critical of the manager for not agreeing to sign Sturridge in the summer of 2012, not least because I’ve been a big fan since seeing the striker at the age of 16. But equally, there were whispers about his temperament and attitude, and various Chelsea managers didn’t seem to rate him (although there was the evergreen Drogba, plus an overt pressure to play Torres), so it’s not like the signing, at £15m, would have been a no-brainer. For all the naysayers, I couldn’t shake my belief that there was a top player in Sturridge waiting to get out.

That said, I’ve also found myself enamoured with plenty of other youth prodigies who, for whatever reason, just didn’t kick on as expected and drifted down the divisions, so it’s never a given. For all its association with a certain way of trading, the biggest impression Moneyball left on me was the way that some sensational youngsters who ‘have it all’ (like Billy Beane in baseball) were still never destined for greatness as players.

Time will indeed be the judge of Suarez and Sturridge. My words of high praise may soon appear foolish. I’m sure that in 2001 I was as excited about the Owen/Heskey partnership as any other fan, not least when they troubled European defences for Liverpool and, for England, tore apart Germany in their own backyard. But now many look back at Owen with a bit of a sneer, seeing him as a fairly one-dimensional player (though he was obviously still very good at what he did), and Heskey is viewed with a sense of unfulfilled potential. They were young, and in-synch (albeit not as imaginatively as the current duo), but before they ever really got going their best days were behind them. Compared with Suarez and Sturridge, they were certainly lacking extra dimensions.

By now, Suarez, with almost 250 goals for clubs and country at the age of 26, is proven beyond doubt as a top international striker; one for whom the term ‘world-class’ seems increasingly inarguable, if excluding the noise that colours judgement on him.

Sturridge is the one about whom questions remain. There’s still a sense that he could be something of a flash in the pan; he’s already twice gone from prolific early season spells at Bolton (on loan) and Chelsea back to reserve football.

But he looks like someone who has come of age, having passed that invisible point where people start to take a player a lot more seriously. He’s now at the stage where he could go ten games without scoring before a manager would even think about dropping him. Before, unless he was creating plenty (which, in fairness, he usually does), you imagine it would be one or two games, tops. He seems at home, both at Liverpool and as a regular Premier League starter.

Even if Rodgers’ side qualify for the Champions League you’d have to think there’s a good chance Suarez’s wanderlust will make this the final season of the SAS (I usually hate those acronyms, but I guess it’s a helpful shorthand). Real Madrid will surely come knocking, when they realise that Gareth Bale is nowhere near as good as the Uruguayan, a force of nature who would succeed anywhere in the world.

With that in mind, it’s perhaps best to sit back and enjoy what Liverpool’s two strikers offer, like knowingly entering the final season of a beloved television show. Their brilliance together can be cherished, and if the partnership is sundered by Suarez’s departure (or a 38-game ban for performing a colonoscopy on the linesman with a corner flag), we can say that we were lucky enough to have witnessed something that, unlike the League Cup successes of 2012, 2003 and 1995 (for example), we will still be marvelling at in years to come.

After all, as much as silverware is the aim of the game, it’s not always trophies that live longest in the mind. Sometimes it’s special players who spark the imagination, and burn their talent into our minds.