The Reds entered the last international break as league leaders and victory over Crystal Palace on Saturday at Anfield – 3pm kick off UK time – would ensure we entered the forthcoming break for the World Cup qualifiers in the top three (depending on how Spurs fare against West Ham, with Liverpool and Tottenham currently on the same number of points and with the same goal difference).

Crystal Palace currently occupy 19th place, having won just one of their opening six league games; a 3-1 victory against Sunderland at Selhurst Park. Their five defeats have seen them concede nine goals, with just one goal scored in their favour. 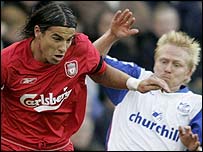 The teams last met in the Premier League during the 2004/05 season where the Reds secured a 3-2 victory at Anfield thanks to a Milan Baros hat-trick, before losing the reverse fixture 0-1 at Selhurst Park.

Palace’s manager Ian Holloway may take some comfort from his 100% win record against Liverpool, having led Blackpool to the league double over us during the 2010/11 campaign, the only two games he’s faced us as a manager before this season.

There have only been 13 previous meetings at Anfield in the league since 1969, with the Reds having won 10, drawn two and lost one, scoring 38 goals and conceding seven in the process. Our 9-0 win from the 1989/90 season is our record victory in this fixture, while Palace’s 2-1 win during the 1991/92 season is their biggest (and only) league victory at Anfield.

Liverpool’s record against teams managed by Ian Holloway (all competitions):