The Recipe For a Great Team?

The Recipe For a Great Team? 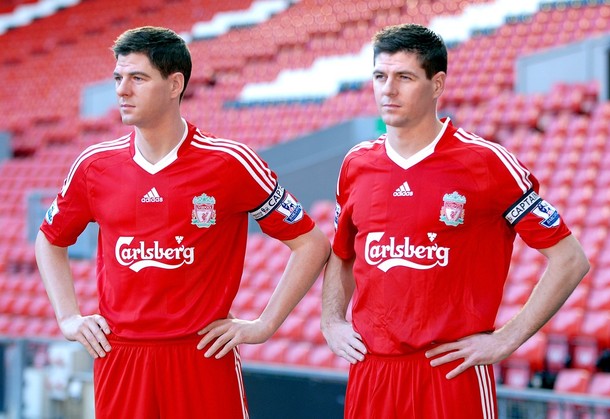 At the end of ‘What Are The Ingredients of a Great Team?’, TTT ran a survey to allow subscribers to vote on which players demonstrated each of the ‘elements’ discussed. The number of people completing surveys ranged between 44 for more established players to 28 for less familiar players. An error in the survey meant that Flair was not offered as an option to vote for on a number of players. Thank you to everybody who took part. 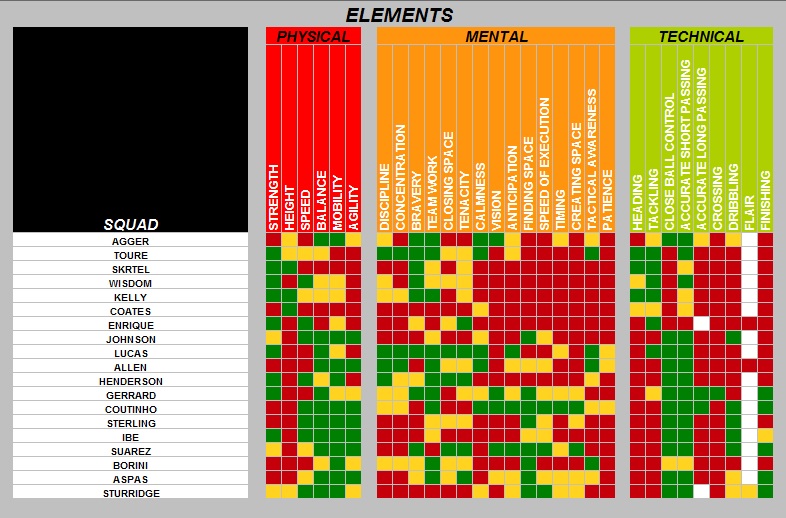 Some may describe these results as the ‘wisdom of crowds’. It is certainly a democratic view and shows what those people that chose to take part think. It is important to recognise though that what these scores tell us is not a reflection of the strength of the ‘elements’ in each player’s profile. The percentage figures tells us what proportion of the voting group thought the player demonstrated an ‘element’.

I asked Mihail to complete a survey separately. Although this does not provide such a graded picture, what it does offer is an assessment from the nearest we have on TTT to a ‘specialist’. It is not to suggest that his view is either ‘correct’ or ‘better’, but it is the view of someone who has studied players performance intensively for the last four years, and also has a more detailed understanding of the ‘elements’ resulting from the discussions that took place when assembling the list.

So what we have is Mihail’s opinion of the each player’s ‘elements’ profile along with what is effectively the subscriber surveyor’s level of agreement with his opinion. 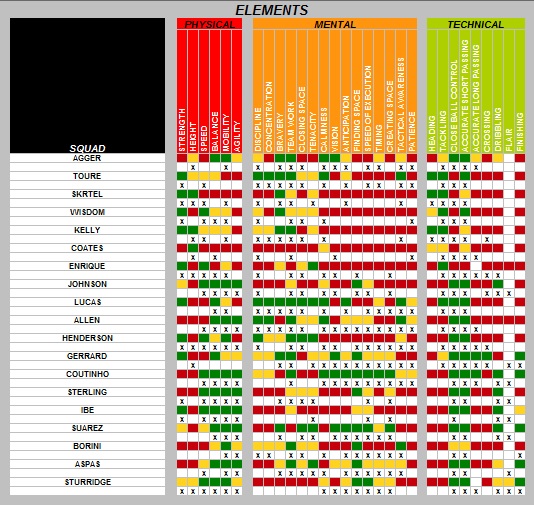 There was little or no disagreement about the ‘star’ players like Gerrard, Sturridge, Suarez and Coutinho. The biggest differences of opinion were for ‘elements’ that Mihail saw demonstrated by Enrique and Henderson that subscribers did not. It may perhaps be argued that these ‘star’ players draw the eye and get greater attention, while Mihail’s focus across all games is on the contribution of all players.

I do not want to derail this article down a potential black-hole of a debate about individual players and individual ‘elements’. I will work with Mihail’s profiles in this article for the purposes of trying to move the conversation forward. 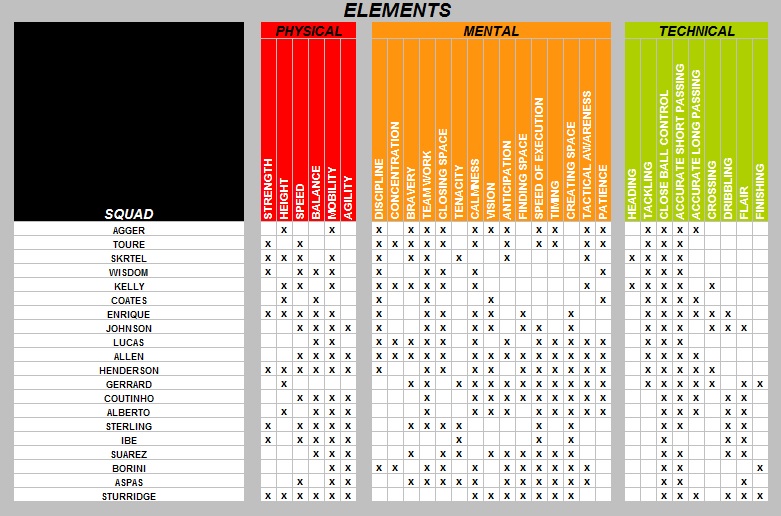 There may be some value in looking at the overall squad before going further. It is worth noting that this profile was completed before the first game of the season.

The most common ‘element’ present through the squad was Close Ball Control (all 19 players) followed by Accurate Short Passing (18), Mobility (16), Team Work (16), and Vision (16). This should not be a surprise for a squad focusing on possession-based football.

The least common ‘elements’ were Heading (2 – Skrtel and Kelly) and Finishing (3 – Gerrard, Borini and Sturridge). Other rarer ‘elements’ across the squad were Concentration (5), Tenacity and Crossing (6). To put this in practical terms, whatever XI is selected from this squad of 19 players, at best a minimum of around half the team will be lacking Concentration and Tenacity.

The most ’rounded’ players (i.e. demonstrating most ‘elements’ in their profile) were Allen and Henderson, who both demonstrate 22 of the 30 ‘elements’. Then comes Gerrard who (despite his age) still demonstrates 20, then Coutinho and Sturridge who both scored 19.

It should also be stressed that not all gaps in a player’s profile are ‘bad’. The key issue is not whether a player possesses an ‘element’ or not, but whether their ‘element’ profile is matched to the requirements of the role they are expected to deliver.

With this in mind it is useful to look at two players just a little further down the list who demonstrated 18 of the 30 ‘elements’. Despite Johnson and Enrique both apparently being among the most ’rounded’ players, the key question is whether these ‘elements’ are matched to the roles they may be expected to perform.

Of the six possible roles Enrique may be considered for (Defensive Full-Back, Supporting Full-Back, Overlapping Full-Back, Wing-Back and Winger/Inverted Winger) he is not a ‘perfect fit’ for any.

In the games against Stoke (H), Villa (A), and Man Utd (H), Enrique was playing in the Wing-Back role in which he was lacking 32% of the requirements. His level of suitability for each of these six roles can be judged by the percentage of mis-match shown in the table below. The role with the lowest mis-match for Enrique is Wide Forward (27%).

Johnson’s profile shows very similar results, lacking Concentration, Bravery, Tenacity, Anticipation and Timing required in all six roles he may be considered for.

In the games against Stoke (H), Villa (A) and Man Utd (H), Johnson was playing in the Wing-Back role in which he was lacking 28% of the requirements. The role with the lowest mis-match for Johnson is Winger/Inverted Winger (25%).

At the other end of the spectrum, the 19 ‘elements’ in Coutinho’s profile are more than a ‘perfect fit’ for all four roles that he is likely be considered for.

Obviously an ideal situation would be having such a ‘perfect fit’ in every role. As I suggested in the previous article, this would add an additional bonus factor to the the team of trust and confidence between players, and add an extra ‘glow’ to their performance.

However, in the games against Stoke (H), Villa (A) and Man Utd (H), Coutinho was the only player achieving a ‘perfect fit’ with the role he was assigned. The other nine outfield players lacked at least one ‘element’ required for their role. Apart from Enrique and Johnson, there was also Toure (29%) and Henderson (28%) lacking over a quarter of the ‘elements’ required for their assigned role.

The question could be asked whether or not Coutinho is the ‘best’ player, or whether he is simply the player that has been best matched to a role he has the ‘elements’ required to perform? Future pieces of work may be to go through the whole squad and look at each player’s ‘best-fit’ roles, and also look at if new arrivals in the squad are better fits to the role requirements.

I want to move away from focusing only on individual players and look at what is taking place between players, so will initially look at the pairings through the team (centre-backs, two pairs of wide players, midfield, and strikers).

One initial question to ask is whether the right partnerships can help to compensate for the gaps in the mis-match between the role requirements and the individual player profiles? 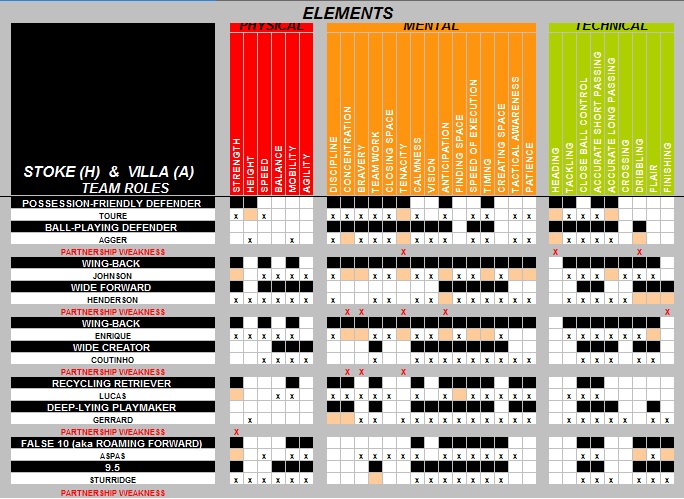 For the front pair Aspas has three gaps against his role, all of which are covered by Sturridge, who has one gap which is covered by Aspas. Between them all requirements of the partnership are available and deliverable. This is the strongest partnership in the XI.

For the central defensive pair Agger and Toure both have four gaps against their roles, with Agger covering two and Toure covering one. This still leaves Tenacity and Heading as required ‘elements’ that remain uncovered in the partnership.

For the wide right, Johnson has nine gaps against his role, five of which are covered by Henderson. As we have already seen, Henderson is the joint most ’rounded’ player in the squad, yet despite this he still has four gaps against his role, two of which are covered by Johnson. Between them this leaves Concentration, Bravery, Tenacity, Anticipation and Finishing as required ‘elements’ that remain uncovered in the partnership. This is clearly the weakest partnership in the XI.

There is some work required to decide how to score these partnerships to represent the level of impact of such gaps on their effectiveness.

Given the percentage of gaps on the left and right partnerships, I also looked at the further cover provided by Gerrard on the right and Lucas on the left.

Over on the right Gerrard covered the Bravery, Tenacity and Finishing gaps, leaving just Concentration missing from the requirements. As above, Johnson and Henderson covered for the Discipline gap in Gerrard’s role requirements.

There may also be some value in looking at the XI as a whole in those two games against Stoke (H) and Villa (A). All players had the ‘elements’ of Calmness, Close Ball Control and Accurate Short Passing. All players except Enrique had the ‘element’ of Speed of Execution. Again, this is to be expected from a team seeking to play a possession-based style of football.

However, across the ten outfield roles, 17 ‘elements’ that are required by roles are not in place. Six were gaps for just one player (e.g. Johnson – Patience). Other required ‘elements’ gaps were more wide spread.

For four of the ten outfield roles, Tenacity was a requirement and none of the players in those roles demonstrated it. This was the whole back four.

For six of the ten roles, Concentration was a requirement and only two of the players in those roles demonstrated it. Those that did not were Gerrard and threee of the back four (Agger, Johnson and Enrique).

For seven of the ten roles Strength was a requirement, and while four of the players in those roles demonstrated it, three did not -(Johnson, Lucas, Aspas).

All ten outfield roles had Anticipation as a requirement and, while seven of the players in those roles demonstrated it, three did not (Enrique, Johnson and Henderson).

This starting XI saw one change for the Man Utd (H) game, with Skrtel replacing Toure. According to the model both Skrtel and Toure have a 29% mis-match to the role of Possession-Friendly Defender, but the change made an improvement to the overall strength of the partnership, with only two required ‘elements’ left uncovered (compared to three with Toure and Agger).

It may also be interesting to consider what impact the return of Suarez might have. His ‘elements’ profile is not a ‘perfect fit’ for any of the nine possible roles he may be considered for. The ‘best fit’ would be to either Wide Creator (12% mis-match gap), Wide Forward or Deep-Lying Forward (both with a 13% mis-match gap).

If it is assumed that Suarez will be used as a like-for-like replacement for Aspas in the role of False 10, then while both Suarez and Aspas both individually have three gaps, the partnership is actually weakened with Teamwork now being a gap for Sturridge that is no longer covered.

To round off for now, I just want to repeat some of the limits of the model.

This is a point of view about the relevant list of ‘elements’ for outfield players – it may be inaccurate or incomplete.

This is a point of view about individual players’ profiles against those ‘elements’ – again this may be inaccurate or incomplete.

This is a point of view of the ‘elements’ required for each role – it may be inaccurate or incomplete.

This is a point of view about a way of combining those profiles against role comparisons into pairs – it may be inaccurate or incomplete.

The purpose of this project is to try to move the conversation forward in finding a way to talk about what is happening between players in a team rather than focus on ‘star’ individuals and treat those around them as mere supporting extras. There is still clearly plenty of work to do to develop and refine the model further and test whether it appears to reflects the real world to some degree.

As always, a huge ‘thank you’ to Mihail for all his support and advice with this project.