Table toppers Liverpool – yes we’re just three games into the new season but it’s still nice to read those three words in the same sentence – will be looking to make it four wins from four when we travel to the Liberty Stadium on Monday evening, 8pm kick off UK time. 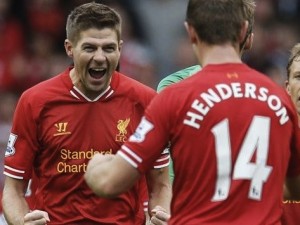 If the Reds pick up all three points against Michael Laudrup’s side, it will be our best start to a league campaign since 1990/91 when we won our opening eight league matches. The Reds made some astute (on paper at least) transfer business before the summer window closed and that combined with our current 11 match unbeaten league run – one defeat from our last 15, five league wins in a row – means the feel good factor is as high as it’s been for a long while.

Swansea have had a tough start to the season, having to navigate the Europa League qualifiers to make it to the group stages, combined with an opening day visit of Manchester Utd to the Liberty Stadium resulting in 1 -4 defeat, swiftly followed by a trip to White Hart Lane where they lost 0-1 to Spurs. Their last outing in the Premier League saw them overcome West Bromwich Albion 2-0 but that was only their second win from their last 13 league matches.

Liverpool’s record against teams managed by Michael Laudrup (all competitions):