Liverpool’s 2-2 draw with Swansea City at the Liberty Stadium on Monday evening saw us move back to the top of the Premier League table and extended our un-beaten run in the league to 12 matches, a sequence that has seen us win seven and draw five.

Next up for the Reds is the visit of Southampton to Anfield on Saturday with a 3pm kick off UK time. The Saints – under the management of Mauricio Pochettino – currently sit in 11th place with five points from four games.  They’ve yet to score a league goal from open play this season with Ricky Lambert scoring a last minute penalty to secure all three points against West Bromwich Albion on the opening day and Jose Fonte scoring an 88th minute headed equaliser from a free kick to claim a 1-1 draw at Sunderland. A 0-1 defeat away to Norwich and a goal-less draw at St Mary’s against West Ham, means they’ve won just one of their last ten league games, with five goals scored and nine conceded in the process. 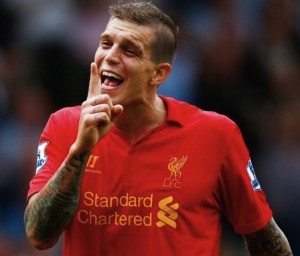 The corresponding fixture last season saw the Reds leave Anfield with a 1-0 win courtesy of a Daniel Agger header. We’ve won eight of the last 14 league encounters at Anfield, with two defeats and four draws making up the numbers. Our record victory in this fixture came during the 1998/99 campaign when we hammered the Saints 7-1. That game was notable for all seven of our goals being scored by graduates from our youth academy, with Robbie Fowler (hat-trick), Dominic Matteo (his first ever goal for Liverpool), Jamie Carragher, Michael Owen and David Thompson all finding the back of the net.

Liverpool’s record against teams managed by Mauricio Pochettino (all competitions):