Given the injuries following the Notts County clash, Rodgers’ XI was precisely as expected – with one change compared to the last two league games: Skrtel in for Toure.

The surprising decisions, in terms of selection, came from Moyes. With Rooney and Kagawa both unavailable due to some minor (but enough to leave them out of the match squad) injuries, it was logical to see Giggs starting. The shock though, was to see him starting on the right flank, with Valencia benched and replaced by Young on the left wing. This meant Welbeck was left to play behind van Persie. 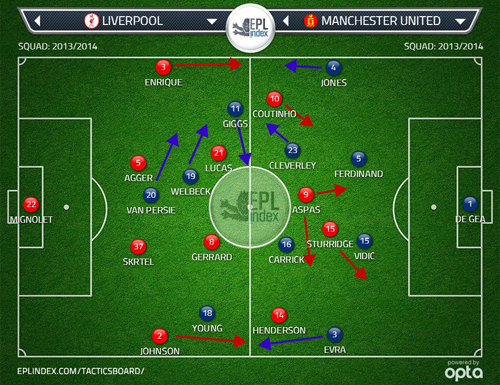 What was fascinating in this game was that all of these presumable expectations, and counter-expectations of both managers and their teams, did not pan out precisely as described below. In a way, this helped to make the game as technically and tactically dull and poor as it was, but it also served to produce a subtle tactical battle between two managers who might have had different starting strategies, but were then forced to adapt during the game, with each potential decision having huge potential risks and rewards. The main tactical interest was sparked not by what actually happened on the pitch, as there was little of real tactical interest there, but by what happened in both managers’ minds, in regards to what they expected each other to do before and during the game.

It could be argued that the early goal came too soon for both teams; an unwanted distraction, or something they would have been happier to avoid so early in the game. Of course, football’s main aim is to score goals, as this is what wins you games. But sometimes – and especially in the modern, so tactically-oriented, football – there are such things as overall strategies, tactical aims and the timing of the goals, that in some games seem more important than the sole action or fact of scoring a goal. All of this is further magnified based on the pre-match context, how both managers might prefer the game to unfold etc.

With Rodgers, and consequently Liverpool, being a naturally pro-active manager and Moyes – and now United – being a traditionally re-active one, it could be said that the early goal forced both managers and their teams to play in a completely contradictory way so early in the game. There is the possibility that each manager would have preferred his respective team to play up to their usual style. For Liverpool, given their fitness issue following the midweek game, it might have been preferable to control the game via passing the ball and produce a sterile domination in the manner seen in the first half against Villa. The home team would not have been happy to spend the whole game (except for a few minutes, given the goal came in the fourth minute) forced to defend without the ball (which is much more draining on energy and concentration) as they were most probably expecting the goal to force the visitors to come at them. Moreover, given Man United’s freshness, one would expect that in such a context, the away team would dominate massively and even have the physical and technical abilities to overrun Liverpool, especially in the second half.

As for United (read Moyes), it could be argued with a high degree of certainty, that he would have preferred his team to play the majority of the game defending deeper, inviting Liverpool to come at them. His team could then exploit the resulting space down the channels (United’s main areas of preferable directions to attack under Moyes) on the break, and count on Liverpool’s expected fatigue in the second half.

What the early goal produced was such a context that forced both teams out of their presumably preferable and surely naturally most comfortable approach, in principle, and specifically for this match. Suddenly United – whether they wanted to or not – should have been attacking and going for an equaliser, while Liverpool were forced to be much more reactive in order to contain the expected United wave of attacks. The alternative for Liverpool was to go toe to toe with United in a highly intensive and attacking-oriented game tempo, where both teams would be trying to keep the ball and attack. Logically, given the fitness issue following the midweek game, this is something that Liverpool would not have been able to keep up for the whole game, risking eventual collapse and just praying the opposition would have ‘one of those days’ that everything seems to go against them.

Based on this it was logical to see Liverpool adopting the alternative variant – just dropping deep, conserving energy and trying to hit on the break. This option would still leave the team vulnerable against United’s expected attacks, and later on in the game, by being tired and unable to keep up, based on the decreased energy levels. However, sitting deep seemed less of a gamble, given the context of the match, and the fact Liverpool were winning one-nil.

With the scene set above, it is time to go through what actually happened on the pitch.

Right from the start both teams displayed enthusiasm, transformed into a willingness to play with intensity, to drive forward in attack. A match of such magnitude and especially given the occasion – a day before the birthday of one of the biggest footballing legends of all time, let alone Liverpool’s – could be ‘forgiven’ for having the ‘emotion first, strategy second’ opening of the game. This period saw both teams exchanging direct attacks with less concern about ball retention and playing carefully to minimise the risk of unnecessary early mistakes. This resulted in the teams quickly creating three good goal-scoring chances each. Apart from the goal itself, Liverpool had Gerrard and Coutinho’s dangerous shots from just outside the box. For the visitors, Van Persie’s overhead kick, as well as Welbeck twice going close to scoring, demonstrated the frenetic start.