Each day thousands upon thousands of words are written about football. A lot of it is fluff; guess work by those who either wrongfully imply to have contacts within the game or else argumentative nothing by people trying to show how clever they are.

There is very little which gives you real insight into how the game works; very little from which you walk away feeling that you’re slightly more capable of discerning what is happening.

The Nowhere Men is one such rarity. As he journeys into the world of football scouting, talking to an impressive number of people who work in that area, Michael Calvin slowly shows you what goes into scouting a player, bringing down the illusion – for those naïve enough to believe it – that selecting a player to add to a squad is any easy process. 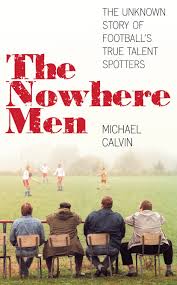 One of the heroes of the book is Mel Johnson, Liverpool’s main scout for the south of England which is a huge benefit as it adds to the insight, showing how a player like Jordon Ibe was first spotted as well as shedding more light on Damien Comolli’s operations whilst at Liverpool.

What made you think of writing a book about football scouts?

We live in a world were football is massively over-exposed. We know every last thing that happens in the game, players present a certain image of themselves, clubs work increasingly hard at massaging their image as well.  One area people know very little about is scouting and recruitment. And that’s strange because if you look at it scouts are central to the mythology of football.  They are the faceless men who stand on the touchline and spot raw talent.  But no one really knows who they are, were they are, how they operate and why they do what they do. It is a really disconnected life, a lot of time on the road, eating on the run. The thing is that they’re not really appreciated by the game itself.  That’s the one thing that really surprised me in the fifteen months that I spent on the road with these guys.

They were almost disrespected by their game and their clubs, to a degree, and that really did surprise me.

How long did you spend researching and interviewing people?  And how did you decide who to talk to?

15 months is about what I spent on the road.

Football is a very big industry but a very small world.  I got the idea through a guy called Jamie Johnson who is Millwall’s chief scout. For a previous book, which is called Family, I spent a year basically embedded at Millwall FC, which is an interesting club; uniquely challenging in many ways but which I found to be really rewarding. One of the chapters was on the scouting process, dealing with Jamie and a guy called Steve Jones who was there at the time.

We were talking in the manager’s office after a game and Jamie said “you should do a book about us scouts”.  It was interesting because that chapter, in a book that was very well received and was nominated for the sports book of the year, did get a big reaction from the public.  So I said “well, let’s have a look”.