Tactics for Beginners – No 9

Tactics for Beginners – No 9 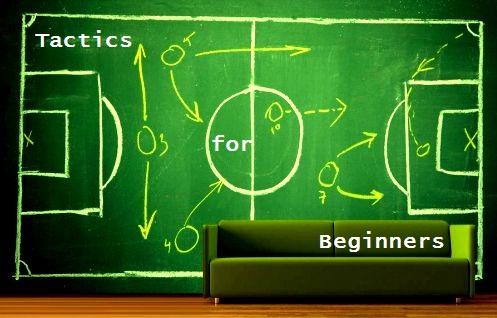 This will be different depending on the team’s style of play. If Blue team are a ‘soak-up-and-burst-out’ counter-attack team, they will want to move the ball forward into vacant space at great speed to try to use that open ‘window’ before Red team can hold up play, retreat and close the window. Are the whole of the defence and midfield trying to get the ball to their midfield ‘creator’ to deliver the long and accurate pass up front, or are they all expected to be able to do this?

As a general rule it would be expected that both the defensive and midfield line would all be capable of launching such passes. The aim would be to feed the forward duo (be it split forwards, or a lone striker and an attacking midfielder behind him) over the top or the wingers down the channels.

However, in modern football increasingly we see counter-attacking teams being geared up towards recycling the ball from deep, trying to lure the opposition higher up and only then hitting them on the break. Here, the Blue team’s creator would more often than not eventually be fed the ball. Then he will in turn seek to launch those penetrative passes into the forwards’ paths.

Would all reactive ‘soak-up-and-burst-out’ counter-attack teams have two central midfielders (one destroyer and one creator), whether that was part of a midfield 4 or the double pivot in a 2-1 midfield?

Of course, in modern football the midfield units are becoming even more sophisticated with additional possibilities. For example, in the 4-1-4-1 model you could have a ‘regista’ type of ‘anchor’, who will be the main playmaker with the midfielders ahead of him the hard-working scrappers. In the 4-4-1-1 model you could have the player in the hole being an additional proper attacking midfielder (‘false 10’) with the central midfielders being either two ball-winners or split into the destroyer-creator partnership.

So is the creator role in a counter-attacking team doesn’t have to be a deep lying playmaker, but the role will still require the protection from others to allow him to deliver his creativity?

Again this will depend on many things. What is the exact shape? With what structure does the manager prefer to defend and attack? What type are the rest of the midfielders? Will the team prefer to hit on the break immediately, or will they be aiming to first calm the tempo and work the ball around to force the opposition to come at them before launching those penetrative balls forward?

Briefly, a team that is playing 4-1-4-1 and aiming to counter-attack could have such a deep-lying playmaker. This will be the player between the defence and midfield who, in possession, will aim to quickly switch the play and feed the attack; while without the ball will try to further squeeze the space in that zone. In the 4-4-1-1 model, generally a counter-attacking team will line-up with a proper ‘Number 10’ with the midfielders behind him expected to ‘carry his water’ when out of possession as this player will need greater positional freedom when the team is with the ball. He is then able to be the team’s main creator, expected to drift wider, drop deep and push forward in order to try and link his team in every possible way to quickly turn possession into dangerous attacks using quick transitions.

With the proactive possession-oriented teams that prefer to swarm forward steadily, they will be looking to build a passing chain from the back with a series of short ‘low risk’ passes. It would be helpful to look at the defensive and midfield roles when their team have possession and moving through their own cold zone to the warm zone.

Let’s start by looking at the keeper’s role at the start of this chain. He is looking to deliver low risk passes to players around the edge of the box either in open play or from restarts. Will there be a preferred pattern of play in how he should do this, and what is the thinking behind it?

Imagine that Red possession-oriented team is playing 4-1-2-3, with the opposition Blue team playing 4-2-3-1. This means there is a perfect match up in terms of their shapes, so there is no clear tactical advantage for the Red team in terms of zone where the recycling process could be safely channelled. This means the Red team would plan to recycle laterally across the back four with the aim of forcing the opposition front quartet to eventually lose their shape and a gap to be opened up somewhere. In this moment the Red defenders should quickly pass the ball into the midfield zone for the same thing to be repeated.

When both teams are matched up in terms of formation, the crucial thing is to recycle the ball until a gap is opened in order for your team to transform the recycling process gradually further forward. 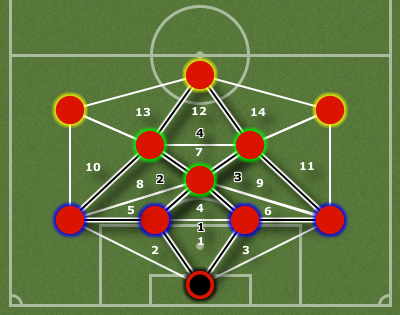 So when they are passing with no apparent progress, we should be watching the opposition movement and waiting for that gap to appear.

However, in this case the keeper would really be useful if he is able to recycle too. By including him there would be a 5-v-4 advantage at the back, so the Red team should have that spare man to work around the Blue team when bringing the ball out of the defence. The problem will come as even with the Red team having that spare man, the rest of the team would be man-for-man occupied by the Blue team (a by-product of the shapes being mirrored). So although the keeper will often receive the ball he could find it very hard to pass to a free teammate. That’s why it’s again vital that the rest of the team continue to move off the ball, even interchanging, in order to lose their markers and become free to receive the ball. Generally this is done with the front players dropping deep and losing their markers (as presumably the opposition’s defenders will be reluctant to follow them so high up the pitch). This will make the Red team compact with the players flooding their own half, something that should increase the numbers of passing angles. Then it’ll be a case of gradual and patient progressing forward as a unit. 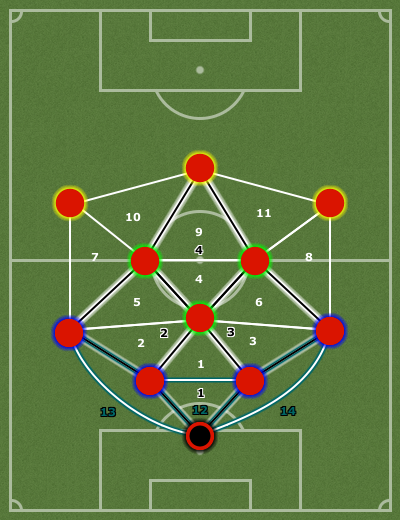