In the Premier League’s inaugural season of play the most expensive team cost £6.5 million to field, and it belonged to Liverpool. All 22 teams’ payrolls that 1992/93 season totaled £90.5 million, a sum surpassed by the individual payrolls from a quarter of the teams in the league’s 20th season. The least expensive payroll in 2011/12 – Swansea’s – was more than five times that of Liverpool’s in 1992/93, and represented just 2% of the £1.626 billion spent on wages in the Premier League that season.

English football has had a business sensibility about it longer than the Premier League has been around, but it is the riches of the Premier League era that have made English football big business.  With these riches have come the other trappings of big business – corporate sponsorships, leveraged buyouts, non-English ownership of clubs, a few money-fueled assaults on the league’s old guard, and several administration-laden falls from grace due to poor risk management.  One of the latest adoptions of business practices in football worldwide, and certainly the English game, has been the use of analytics to understand the business of football – both on and off the pitch.  It’s this aspect of the game that Professors Chris Anderson and David Sally document so well in their new book The Numbers Game: Why Everything You Know About Football Is Wrong.

At its core, The Numbers Game is a narrative about how numbers have permeated the game for decades.  If the appropriately titled Soccernomics by Simon Kuper and Stefan Szymanski was more about the Freakonomics-like issues surrounding the football pitch, The Numbers Game purposefully sets out to explain how numbers related to match play help explain bigger truths and stories that have unfolded throughout the game’s history.  The book is broken up into three parts – Before the Match, On the Pitch, and In the Dugout.  Each part peels back an additional layer of the onion, exposing inconvenient-but-enlightening truths that build upon each other to help the fan understand how much of the game can be quantified today, how much of the game is simply luck, and what could be quantified tomorrow with some additional work.

Such an approach is key to football because, as the authors painstakingly point out in Before The Match: The Logic of Football Numbers, football’s analytics movement and the ability to quantify the game are very different than those found in some American sports where analytics are more prevalent. Baseball has a far longer history of statistical analysis given its very distinct events and clear player positioning and relationships. Basketball and football, while having less mature analytics movements, lend themselves well to analysis because of their far greater number of successful scoring opportunities. The Numbers Game lays out a very compelling case that at least 50% of football’s results are due to luck.  That’s a much higher proportion than other sports, and means that ultimately the analyst’s capability to impact the game may be more limited than in baseball, football, or basketball. This reality leads the authors to make the following observations or conclusions:

In one of the book’s rare analyses of individual players, the concept of “marginal benefit of goals scored” is used to suggest that Chelsea should have bought Darren Bent instead of Fernando Torres given the two players’ goalscoring records before and after Torres’ transfer.

The remaining 50% of the game that may be potentially influenced by someone other than Lady Luck is detailed in the next two sections of the book.  The second part, On the Pitch: Football “Intelligence” and Why Less is More, wades deep into the age-old questions of which formations and tactics produce the best football.  The answer, like in many other sections of the book, is that “it depends”.  The book’s authors do well to take on the current obsession of tiki-taka being the only “proper” or “beautiful” way to play the game.  The antithesis of such play is found in Route One’s godfather Charles Reep, and while the Wing-Commander-turned-football-statto may have come to the wrong conclusions about the best way to play the game he is to be commended for being one of the first analysts to get people to focus on quantifying the game.  The authors also spend a good bit of time showing what Reep’s analysis can explain – how teams like Stoke City and Roberto Martinez’s Wigan Athletic exploit tactics other than tiki-taka to avoid what should be sure relegation.

The common thread between Route One football, tiki-taka, and Stoke or Wigan is that conceding possession, shots, and ultimately goals is more harmful than scoring goals.  Route One was built upon the premise that fewer attacks, especially those that ended up with shots on goal, came from possessions with a high number of passes.  Thus, kick the ball down the pitch and get it closer to the goal with fewer passes than a build up through midfield.  Tiki-taka, at its heart, is about maintaining possession by wearing out the opposition while probing for a weak link in their defense.  Either way, possession is key and avoiding turnovers is the way to keep possession.  The book explains how both Wigan and Stoke use unique ways to deny teams possession – like Stoke’s strategy of having the ball in play for four fewer minutes per match than the average Premier League team – and nip goals and points – like Wigan’s penchant for scoring more points from fast breaks, free kicks, and longer-range shots than the average Premier League side.  The point is that denying possession and minimizing turnovers can come in many forms. As the authors quote Liverpool’s Bob Paisely,

It’s not about the long ball or the short ball, it’s about the right ball.

Once the author’s have had their say about tactics they move onto the third-and-final part of the book entitled In the Dugout: Building Teams, Managing Clubs.  It is in this final section that the reader is treated to some insider knowledge Anderson and Sally have built up over the last several years of discussions with clubs far-and-wide (a hint of which is provided in this interview from earlier this year).

The central premise of this section of the book is that managers do indeed control a fair bit of their team’s destiny.  The authors take on what they call “the anti-cult of the manager” by demonstrating that football is a weakest link game and how a manager can deal with such weak links. A few hints include buying fewer galacticos, strengthen your 10th and 11th starter through shrewd purchases and training techniques, and follow the 58-73-79 rule when it comes to substituting weak links that might develop within a match due to fatigue.  Anderson and Sally take on the seminal study in Soccernomics linking wages and success, and they come to a different conclusion that wages only explain 59% of league table variation by looking at the data differently than Kuper and Szymanski. Using their own rule of thumb that luck accounts for half a team’s outcome and knowing that nearly 60% of the team’s success is dependent upon its wage bill, the author’s see the manager contributing to 20% of the team’s success or failure.  That’s worth a number of points and several table positions every season.  It turns out the manager can play quite a role in the team’s success or failure, and it’s important the club’s entire management system support the man on the touchline.  Anderson and Sally go as far as quantifying why sacking the manager often leads to no better improvement than if the manager had been allowed to continue in his role.

Ultimately, the book’s best insights are built upon Anderson’s and Sally’s collection of studies from industry outsiders, including a number of quotes or footnotes citing this site’s own Transfer Price Index and the associated book, Pay As You Play.  This belies the oft-repeated statement from Anderson, who views football analytics within clubs being at a stagnation point.  The clubs have reams of data, but are either fearful of it or have management resistant to using it because of the risk of failure.  It’s easier to keep using the tried-and-true method of the former player-as-manager and the sets of eyes in his scouts to determine who to buy, who to sell, who to start, and which tactics and strategies to employ.  In the book’s concluding chapter the authors argue that it’s the outsiders – either the small clubs not at the top of the table today or analysts outside of any club – that will demonstrate analytics’ success out of necessity.  It will be a diffuse network of outsiders who recognize the truth that the number of goals scored within a season won’t increase over the next decade, and the key to success will be paying more for defenders and less for goal scorers.  They foresee the future dominated more by the backroom’s 150 personnel and less by the one man on the touchline, and outstanding organizations will be ones who successfully blend financial and in-game analytics.

If there is one quote that sums up the book’s vision and philosophy, it may be this one from the chapter on manager’s importance entitled Stuffed Teddy Bears.

Football is a game of balance, of light and dark.  Whether it is in choosing between attack and defense, winning or not losing or prioritizing whether to keep the ball or not to give it back, it is a sport defined by choices.  Much of it – as much as half – is decided by fortune, cruel or kind, but there is a substantial part of it that is not, that is influenced by human endeavor.  Some of that is players’ skill.  Some of it is managerial ability.  It is these men who make the choices that determine a club’s fate, or at least determine that part of a club’s fate which cannot be attributed to luck.

It is this idea of balance, the Eastern concept of yin and yang, that permeates the entire book.  If you’re looking for absolutist proclamations backed up by selective statistics, don’t buy this book.  If instead you’re looking to understand how numbers have permeated the beautiful game from its earliest years and how they should impact it going forward, The Numbers Game is a must read.  It will provide any fan with the basic statistical truths that govern the game, and what to look for in coming years as clubs continue to adopt one of the hallmarks of well run businesses – data-driven decision making.

The Numbers Game is written by Chris Anderson and David Sally, and is published by Penguin Books.  The book can be purchased at Amazon UK and other fine booksellers in the United Kingdom.  The book will be published in other European countries and the United States throughout the summer of 2013. 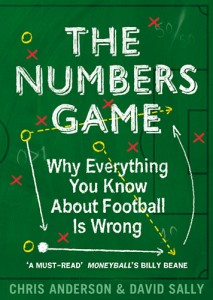