After last week’s debacle against Reading, Martin Jol refreshed the team with a couple of changes. Hughes replaced Senderos at the back, with Richardson stepping in to replace Riise at left back. After his impressive cameo, Kacaniklic was handed a start here, with Emanuelson benched. Karagounis was fit, so he continued in midfield.

With Agger and Gerrard allowed to start their rehabilitation early, changes were bound to happen. Coates and Shelvey came in, with Wisdom replacing Enrique. But instead of reshuffling the pack within the usual 4-2-3-1 shape, Rodgers went back to experimenting with a sort of 3-5-2 (which, to be specific, was more like a 3-1-4-1-1). 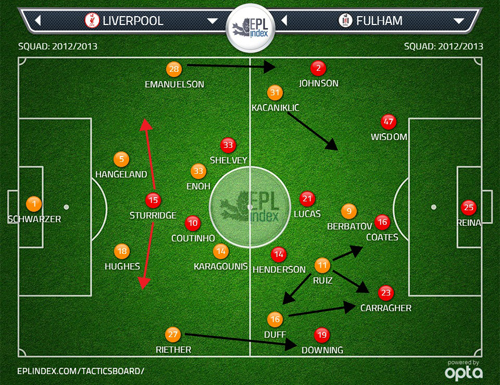 For a game deemed by many as nothing more than a mere pre-season friendly, the game offered a high level of tactical interest. There were different formations locking horns in the first half with both teams trying to play up to their theoretical strengths and putting emphasis on the opposition’s weaknesses. Then there was a half-time switch, followed by another in-game change midway through the second half from the visitors, which provided a different tactical context. Given Liverpool were the main provider of that tactical excitement (although with their fair share of struggles and problematic tactical behaviour in the first hour of the clash), it’s only fair to start with them.

Based on the actual shape and starting XI, a case could be made that Rodgers’ plan was to target the following tactical effects. The plethora of central players (three centre backs, three midfielders and a split forward duo) logically would lead to total possession dominance. Without the ball, the ‘tiered’ and compact positioning of the players would enable the team to execute specific pressing patterns and limit Fulham’s time on the ball. Not only that, but due to the specific nature of the shape itself, there was also the capability to cover lots of ground and not leave any obvious gaps (hence a vulnerability to counter-attacks) during any of the phases.

In attack there was the chance for at least six players (two wing backs, two runners through the middle and two vertically split forwards) to freely spread forward. This means there would be the required diversity in the players’ roles (hence different but complementing passing and movement patterns) to provide enough penetrative angles.  As a result, the team could focus on outplaying the opposition in order to create potent attacking moves and goal-scoring chances.

Based on this, a case could be made that there was the potential for Liverpool to – tactically – look like Wigan in the FA Cup final. With Fulham’s expected shape and specific tactical behaviour, it was easy to see how the overall tactical match-up could have perfectly replicated the Latics’ dominance over their more illustrious opponent. But as the game started and both teams’ actual tactical patterns quickly revealed, Liverpool’s failings started to quickly bubble up.