A KPI Framework for Goalkeepers

A KPI Framework for Goalkeepers

Before we get started…

I was recently asked by someone, I’ll not say who, to give some time to thinking about KPI frameworks that could be used to support various player-centric decisions. For example:

As many on TTT will know, this kind of analysis is something I tend to avoid. But in this case, I decided to make an exception. Given that this type of analysis really isn’t something I’ve made much investment in, I feel the need to manage expectations before I get started with the story-telling.

When these types of questions come up, I will often to defer to someone like Dan Kennett or Andrew Beasley. I just don’t see myself as an ‘authority’ in this area (an area that these guys have dominated, certainly from a Liverpool FC perspective, for many years). With that in-mind, I thoroughly expect these guys, and others, to contribute meaningful comments on top of the work I’ve done here. To avoid introducing bias, I haven’t actually spoken with them during the development – or anyone else for that matter. So, whether it’s considered ‘good’ or ‘bad’ – we’re all going to find out at the same time via the feedback on TTT. I think this is important. The most valuable experiences I’ve had on TTT, as an occasional ‘writer’ at least, have been when my work has been thoroughly chewed – so I’m not worried, honestly. Also, I don’t consider this work to be ‘comprehensive’ or ‘finished’ at all – I just think I’ve reached the point of ‘diminishing returns’ with the data currently at my disposal.

I decided to use goalkeepers for this study for one simple reason.  Their role on the field is relatively consistent both throughout games and across teams. Goalkeepers, by and large, do the same kinds of things in the same areas of the field across a large number of games. Other roles are much more dynamic – like chess pieces that can switch from being ‘knights’ to ‘bishops’ in the space of a few seconds – making consistent comparisons is actually quite difficult unless you can intelligently partition the data (in my opinion at least). So, if a KPI framework is going to be successful anywhere on the field – the goalkeeping role is as good a place to start as any. Especially as there’s been plenty of speculation that Barcelona want Pepe to return to his roots and replace the ageing Valdes. In which case we’ll need to be evaluating another sweeper keeper – Vorm, Mignolet, McCarthy, Ter Stegen? 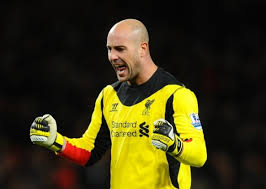 My starting point was the 196 on-ball event metrics for the 2011/12 Premier League season provided by Opta as part of the Manchester City analytics project. This was quickly distilled to 78 metrics that have relevance to the goal-keeping role (i.e. one or more events actually occurred for at least one goalkeeper). I then prioritised the use of events that scored highly in terms of winning/losing impact using a previous piece of research which has been published a couple of times now on TTT.

Further analysis and filtering ultimately resulted in 16 metrics which were analysed in detail (the calculation logic for each is provided at the end of this piece, along with possible six metrics to add to a later version of this work):

I decided it would be helpful to consider how many minutes the various Premier League Goalkeepers actually played during the season, just to make sure that any conclusions/ideas weren’t affected by short-term outliers. Click here for the interactive version: 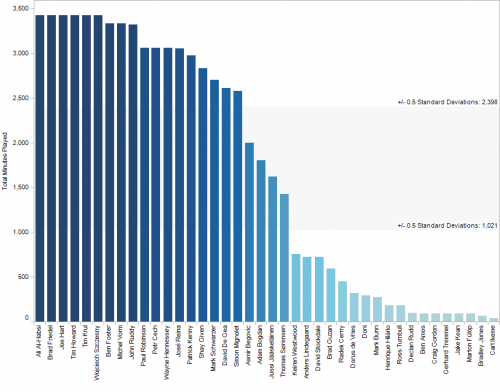 For the purposes of subsequent visualisations, only players that accumulated 1,021 minutes or more will be included.