Pardew surprised with his selection of players and also their positioning. Tiote came back into the side alongside Perch in midfield. Gouffran was replaced by Sissoko down the right flank, with Cabaye replacing Sissoko closer to Cisse. Hence the shape was more like a 4-2-1-3 than the recently used 4-2-3-1. The back four remained the same as in the last game against WBA.

Liverpool continued with the lopsided shape that impressed at Reading and in the second half against Chelsea. Sturridge replaced the suspended Suarez, with Henderson and Coutinho switching over from the positions they started at Anfield last week. 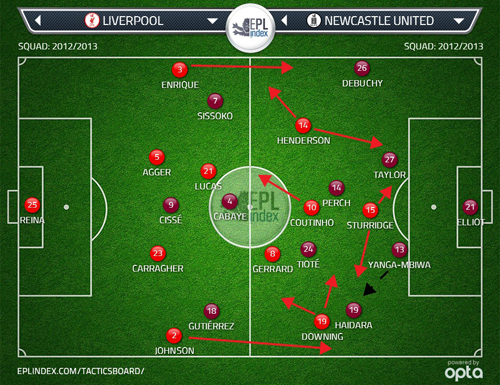 The game started with an early exchange of attacks in the first few minutes. But it was Liverpool who managed to build on their pressure and create a number of dangerous situations. Agger’s goal came on the back of consecutive attacks and corners, with Newcastle’s poor marking and general defending in these situations setting the scene for what was to follow throughout the match.

What made the biggest impression in the opening fifteen minutes of the game was the way Liverpool used their shape to set the tempo, dictate it and exploit the lopsided nature of their formation to penetrate.

It's All About the Right Data