Rodgers largely kept the XI that fared so well against Reading last week. But he did a make a crucial personnel change and subsequent tweaks in the players’ positioning. Sturridge made way for Downing on the right flank, Henderson (now central) and Coutinho (now left) swapped places.

For Chelsea, Benitez lined up with the expected XI, within the 4-2-3-1 shape. The only surprising decision taken by the Spaniard was to hand Torres another start, given he played the full match against Fulham and is likely to feature on Thursday as Ba is ineligible for the Europa League. Another minor surprise could be the starting positions of Oscar and Hazard. Neither of them were playing on a flank they weren’t used to – they are both capable of playing across the whole attacking band of three behind the main striker. But more often than not, when they play together, especially alongside Mata, it is Hazard on the left and Oscar on the right. Here, it was the other way around. This could probably be attributed to Benitez’s idea to have a more defensively responsible player (Oscar) up against Johnson who is dangerous when attacking. Meanwhile, to have the better dribbler (Hazard) on the right flank, up against Enrique with the aim of getting past Enrique and dragging Agger out wide, in order to secure space for Torres to move to his favoured inside right channel. Another explanation could have been with Mata preferring to drift to the right channel more often than not, having Hazard playing there would result in both players combining effectively with each other, something they’ve done throughout the season, especially supported by the overlapping runs of Azpilicueta and the bursting vertical runs of Ramires from deep. It wasn’t a surprise then, that for yet another Chelsea match, the Blues’ most potent passing combination involved Mata and Hazard (28 passes between both players). 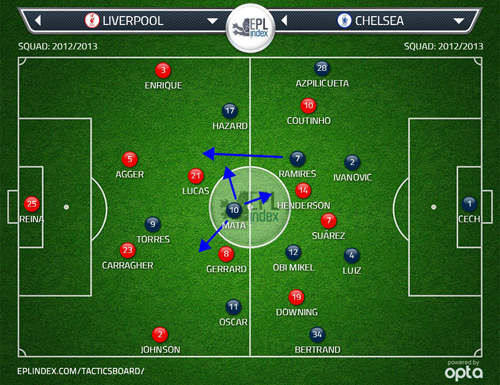 As is tradition over the past two seasons, this game started with a period of ten minutes of quick tempo, full of direct attacks based on quick transitions from one end of the pitch to the other. As the home team, it was logical to see Liverpool being the more dangerous team in that opening period. They managed to create two or three well-constructed attacking moves, with players picking up the ball and quickly heading into the opposition’s half.

The most dangerous attack came in the fifth minute when Suarez sent a beautiful pass for the in cutting Johnson on the verge of the penalty area to head through on goal. Unfortunately for Liverpool, the right back failed to connect properly with the ball, and his shot was off target.

However, once the tempo cooled down after the initial ‘vertical’ ten minutes, mostly due to Liverpool’s directness with very little ball retention, Chelsea seemed like the team with the strategy, tactical ideas and personnel to benefit more. 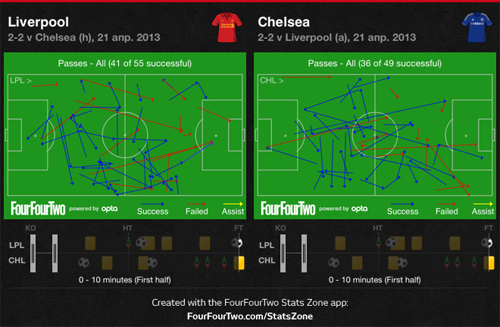 It was expected to see Chelsea approaching this game cautiously and with the idea to be first and foremost compact and stable. As argued in the preview, for them this game was more of a ‘must not lose’ than a ‘must win’ game. On top of this, Benitez rarely approaches big games away from home with an open and attacking oriented strategy right from the start. All of this meant the visitors were happy to just slow the tempo, try to keep the ball as much as possible whenever they had it and try to take advantage of every counter-attacking opportunity. What was slightly surprising was how exactly Chelsea were set up to do all of this.

Euro Hangovers - and How Much Rest Do We Need?